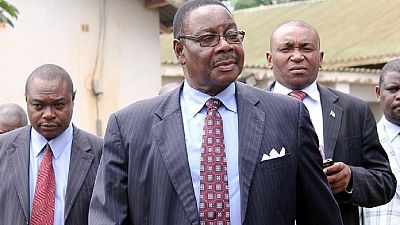 Malawi’s main opposition party on Monday called for President Peter Mutharika to resign over allegations he received a kickback from a $4 million government contract.

Mutharika has called the allegations “fake news” designed to smear him ahead of an election next year.

The Malawi Congress Party (MCP) added its voice to that of civil society groups calling on the president to resign.

We in the opposition have previously and tirelessly raised such issues of nauseating corruption by President Peter Mutharika’s administration.

“We in the opposition have previously and tirelessly raised such issues of nauseating corruption by President Peter Mutharika’s administration,” MCP leader Lazarus Chakwera told journalists.

“He needs to resign and call for early elections.”

The country’s anti-graft body, the Anti-Corruption Bureau, has been investigating a $3.9 million Malawi police food supply contract awarded to Pioneer Investments, a firm owned by businessman Zameer Karim, who has denied wrongdoing.

Malawi’s two biggest daily newspapers have published what they said was the final report into the contract, although the ACB said it had not finalised it and was still investigating the case.

The leaked report said the businessman deposited 145 million Malawian kwacha ($200,000) into an account belonging to the ruling party and of which Mutharika is sole signatory.

Mutharika, president since 2014, has been tipped to be re-elected, but regular allegations of corruption could hobble his campaign in the impoverished southern African nation where reports of government graft have become routine.

Malawians next go to the polls in May 2019 to elect the president, parliament and ward councillors.