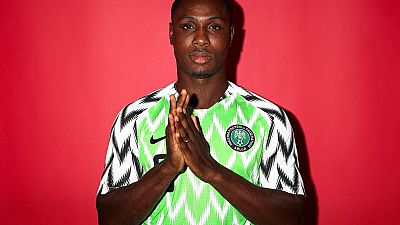 Argentina must win to reach the second round while the Super Eagles can qualify with either victory or a draw.

“It’s going to be war (and) a final of finals because they need to win,” Ighalo told BBC Sport.

It's going to be war (and) a final of finals because they need to win.

“They are going to come all out and (use) every tactic that they know to win a game.”

The clash between Argentina and Nigeria will be the fifth World Cup meeting between the sides – with the Super Eagles yet to avoid defeat.

With maximum points in Russia following wins over Nigeria and Argentina, group leaders Croatia have already claimed one of the group’s berths in the Round of 16.

That has left Nigeria, Iceland and Argentina – runners-up at the 2014 World Cup – scrapping for just one place.

The Super Eagles’ 2-0 defeat of Iceland on Friday moved them second with three points, while both Iceland and Argentina have mustered just a solitary point apiece following their 1-1 draw on 16 June.

Should Croatia beat Iceland on Tuesday in Rostov-on-Don, the African side could go through with a point.

Argentina, by contrast, will qualify with a win if Iceland fail to win on Tuesday or, should the island nation emerge victorious, by outscoring them and so improving their inferior goal difference.

“I am expecting it to be a very tough game but I think we are capable of qualifying,” said Ighalo.

Nigeria’s defeat of Iceland came courtesy of a double from Ahmed Musa, who partnered Kelechi Iheanacho in attack, with Ighalo appearing as a second-half substitute.

Despite being dropped, 29-year-old Ighalo was delighted by the change of tactics from Nigeria coach Gernot Rohr who switched to a back three and started with two strikers.

“It makes it easier because I was isolated (against Croatia) – alone with four different guys – which was very difficult but we played with two strikers (against Iceland), which is much easier for the strikers to move, to come, and you can see that we got goals,” he explained.

The China-based star said there had been a real determination in the camp to atone for the lacklustre display in the 2-0 loss to Croatia, which had upset both the squad and its supporters.

“After the last game, Nigerians were disappointed. They were not happy and saying a lot of things about the team but now they are having the confidence back,” he said.

“We (also) were not happy. We were a little bit angry because we knew we had to step our game and to do better. The mood is so high now in the dressing room because when you win games, everybody is happy. So we want to keep that until our next game.”

Ahmed Musa’s strikes, which came on top of a brace against Argentina at the 2014 finals, made him Nigeria’s top scorer in World Cup history with four goals.

Only Ghana’s Asamoah Gyan, with six, and Cameroon’s 1990 World Cup star Roger Milla, with five, have ever scored more at the finals for Africa.

With three of the continent’s sides – Egypt and Morocco and Tunisia having exited after just two games, Ighalo says Nigeria are very conscious of the need to salvage African pride in Russia.

“That is why we have to do better and step up our game, because two Africans are already out and a loss (against Iceland) would have pushed us out of the tournament,” said the China-based forward.

“We know Africans are back there supporting us and Senegal.”