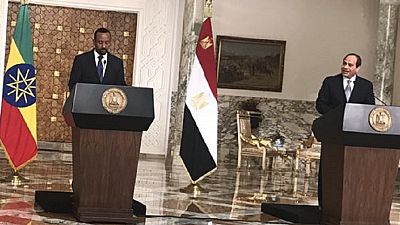 Talks over the Grand Renaissance Dam, Ethiopia’s $4 billion hydroelectric project, have been deadlocked for months.

Ethiopia’s prime minister, Abiy Ahmed was in Egypt for a two day state visit to conclude the resolution of the dispute over the Nile project, following the establishment of a joint scientific committee to handle the matter last month.

At the end of talks, the two leaders held a news conference, where Sisi asked Ahmed to swear to God before the Egyptian people that he will not hurt Egypt’s share of the Nile.

“I swear to God, we will never harm you,” Ahmed repeated the words in Arabic after Sisi, who thanked him for releasing jailed Ethiopians.

The two leaders signalled their commitment to mutually benefiting from the Nile’s waters and cooperate in other projects.

“We have come a long way in building confidence and strengthening bilateral cooperation,” Sisi said.

“We will take care of the Nile and we will preserve your share and we will work to increase this quota and President Sisi and I will work on this,” Ahmed said, addressing Egyptians.

Safeguarding Egypt’s share of the Nile, its main source of drinking water and water for industry and farming, is at the top of Sisi’s agenda as he begins his second term in office.

Meanwhile, the prime minister flew back home with 32 Ethiopians that had been freed from Egyptian prisons at his request.

HE PM Dr Abiy extended his love to: 1) Ex-OLF Comander, Col. ABEBE GERESU, defected with 100 plus soldiers from #Ethiopia & 2) Ex-OLF Political figure who was founder & OPDO Executive Member YONATAN DUBISA. Both abandoning their base in #Eritrea landed in Addis with HE The PM. pic.twitter.com/53YxICRfqi

HE PM Dr Abiy Ahmed concluded his two days visit & seen off by HE President El-Sisi at #Cairo International Airport. He arrived home on board all the 32 inmates freed from #Egypt prisons. They were very pleased & short of words to express their feelings. pic.twitter.com/OQ0yHDoYxj