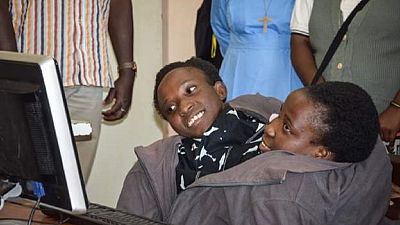 The funeral of the famous Tanzanian conjoined twins who died over the weekend has been held at the Ruaha Catholic University in the southern highlands.

22 year old Maria and Consolata Mwakikuti succumbed to respiratory complications from a chronic heart condition. They had been admitted to a local hospital in December last year but fought for their lives until Saturday when they breathed their last.

They had been joined from the navel downwards and shared organs like the liver and lungs, had two hearts and separate heads and arms.

The university will construct a special center to provide services for disabled people in acknowledgment of the deceased conjoined twins' kindness.

Teachers and students of the university where the twins were studying to become teachers were part of the congregation that paid their last respects to the inspirational twins.

University to set up ‘Maria and Consolata’ Center

To honor the twins, the university said it will construct a modern center for people with disabilities.

Describing the twins as ‘courageous’, university vice chancellor, Prof. Furgence Mbunda, told mourners that said the facility will named after the twins name, ‘Maria and Consolata’.

‘‘The university will construct a special center to provide services for disabled people in acknowledgment of the deceased conjoined twins’ kindness,’‘ he said.

The country’s education minister also asked Tanzanians to emulate the twins who worked hard despite their physical condition.

‘‘Disability is never a hindrance. They still performed well in their academics. And the government gave them a subsidy, not a loan,’‘ Prof. Joyce Ndalichako said.

Maria and Consolata, who were against the idea of being surgically separated, were supported by funding from local government and private donations.

The two, whose parents died while they were still infants, were raised by the Catholic charity Maria Consolata, which had adopted and named them