Ethiopia PM to be honored as an 'African hero' in Uganda 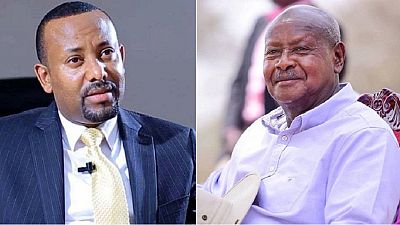 Ethiopia’s prime minister, Abiy Ahmed is set to receive the highest distinction accorded to a head of state by the government of Uganda, as the latter celebrates National Heroes’ Day.

Abiy will pay an official visit to Uganda over the weekend, where he will attend the event celebrated since 1989 in recognition of Ugandans who sacrificed their lives in the struggle to achieve national Independence, peace and democracy.

Uganda’s minister for presidency, Esther Mbayo said the 41 year old former intelligence officer who also took part in the UN peacekeeping mission to Rwanda, will be decorated with a special award in appreciation of his contribution towards the independence struggle in Africa.

President Museveni will award 'The Most Excellent Order of the Pearl of Africa – The Grand Master' to his guest Abiy Ahmed Ali.

‘‘President Museveni will award a special medal (The Most Excellent Order of the Pearl of Africa – The Grand Master) to his guest Abiy Ahmed Ali. This is the Highest Order that is awarded to heads of state and government,” Mbayo during a press briefing on Tuesday at the Uganda Media Centre.

Up to 250 other heroes will be awarded medals commending them for their contribution to peace and dignity in the country.

It will be the fifth outing of the new Ethiopian prime minister following visits to Djibouti, Sudan, Kenya, Saudi Arabia and the United Arab Emirates.