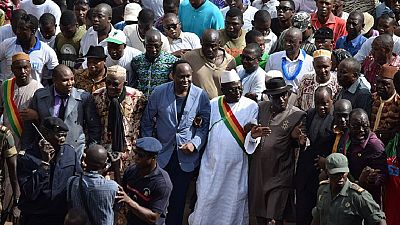 Riot police used teargas on Saturday to break up opposition supporters who had planned to march through Mali’s capital calling for transparency in next month’s presidential election, witnesses and the authorities said.

President Ibrahim Boubacar Keita plans to run for re-election in the July 29 polls, despite criticism that he has not done enough to cut youth unemployment or end an Islamist insurgency and tit-for-tat ethnic killing in the north.

The authorities had banned Saturday’s march in Bamako, organised by a coalition of political parties opposing Keita.

There were 16 injured evacuated to hospital, 10 of them have already been released.

Opposition supporters, who gathered outside the headquarters of an opposition party in the city centre, were met by police carrying riot shields and batons.

“Hundreds of policemen came and surrounded the headquarters, then came in and beat us and fired teargas,” said Alou Niang, a protester.

Protesters injured in clashes with police

Several people were taken to hospital amid the clashes.

“There were 16 injured evacuated to hospital, 10 of them have already been released. One policeman was injured,” said Amadou Sangho, spokesman for the Ministry of Security, adding a police vehicle was damaged and eight people were arrested.

Hospital officials declined to speak to Reuters, but one hospital employee, who asked not to be named, confirmed 14 people had minor injuries while two were more serious cases.

“I was lightly injured participating in the march calling for credible elections. Thank God I was able to help some of the wounded women and young people,” Mamadou Igor Diarra, an opposition presidential candidate, wrote on his Twitter account.

Around a dozen candidates have announced their candidacy, the strongest of which is seen as opposition leader Soumaila Cisse, a former finance minister.

Rising violence across Mali has cast doubt over the feasibility of elections in some parts, especially the north, where Islamist groups have exploited chaos and lawlessness to use the desert region as a springboard for attacks.

Dozens of ethnic Tuareg and Fulani civilians have also been killed in intercommunal violence in the north, while insurgents have killed scores of U.N. peacekeepers and government soldiers.