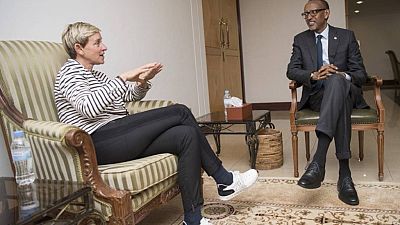 Hardly a week after making headlines for a tourism partnership with one of the biggest football clubs in the world, Rwanda is hosting celebrated American comedian, Ellen DeGeneres, who is in the country on a work holiday.

Ellen, who is with her partner, Portia de Rossi, met with Rwanda’s president, Paul Kagame, where they discussed the establishment of the Ellen DeGeneres Campus that will support conservation of mountain gorillas.

Rwanda takes pride in the fact that it is one of the few countries where mountain gorillas still exist.

The campus which was first announced on Ellen’s 60th birthday as a gift from her partner Portia, will be dedicated the late Dian Fossey’s work in Rwanda.

Dian Fossey was an American primatologist and conservationist who studied gorillas in Rwanda and the wider Virunga region from 1966 until her death in 1985.

Portia told viewers of Ellen’s show that her partner had been fascinated by the conservationist’s work while growing up, and she had dreamed of living in Africa saving gorillas just like Dian did.

The campus located in the Northern district of Musanze, will help expand science, research and conservation activities, enhance educational programmes, and engage people from Rwanda and the rest of the world to join the effort. It will have laboratories, classrooms and showcase Dian’s work, while providing housing facilities for visiting researchers and students.

Ellen’s delegation also visited the Kigali Genocide Memorial Site in Gisozi where they paid their respects to the over one million victims of the 1994 Genocide against the Tutsi.

Tourism is Rwanda’s biggest foreign exchange earner and several government officials have fiercely defended its $40m investment in English football club side Arsenal to feature the ‘Visit Rwanda’ logo on the left sleeve of all its teams for the next three years.