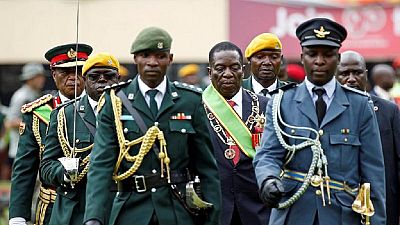 Zimbabwe’s government distanced itself on Wednesday from a deputy minister who said the army wouldn’t allow the opposition to rule if it wins an election this year.

The comments by Deputy Minister of Finance Terence Mukupe – which echoed warnings that the military often made under former president Robert Mugabe – provoked outrage on social media and prompted a government spokesman to describe them as a threat to national security.

In an online video, Mukupe is seen telling a rally in Harare on Monday that the army would not let opposition leader Nelson Chamisa take power if he defeated President Emmerson Mnangagwa.

We cannot say, honestly, the army took the country, practically seized the country from Mugabe, so that they can hand it over to Chamisa.

Zimbabwe is set to hold a general election by Aug. 22, the first since the army forced 94-year-old Mugabe to resign and thrust Mnangagwa into power last November.

Constantino Chiwenga, the general who led the de facto coup, has since become vice president.

“Our country, given where we are and where we are coming from, needs a mature person, a steady hand,” Mukupe told supporters in the Shona language. “We cannot say, honestly, the army took the country, practically seized the country from Mugabe, so that they can hand it over to Chamisa.”

Mukupe did not answer several calls to his phone.

His comments will bolster claims by those still loyal to Mugabe who say he was removed illegally.

Simon Khaya Moyo, acting information minister, said in a statement that the comments did not represent the position of the ruling ZANU-PF party, government or the military.

“Suggesting that our well-respected security organs will act in a partisan manner in relation to the country’s politics, apart from being unauthorised, are unlawful, reckless, improper, uncalled for and thus totally condemnable,” Moyo said.

“They imperil national peace and stability, and amount to a frontal challenge to the tenets and practices of democracy.”

During Mugabe’s nearly four decades in power, the army frequently said it would not allow the opposition to take power and military commanders openly supported ZANU-PF.