Russia has nothing to do with poisoning of former spy: ambassador 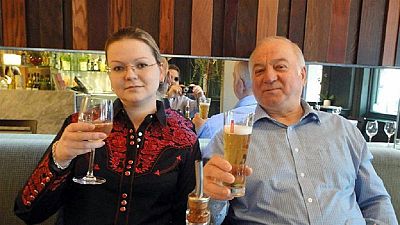 Russian Ambassador to the United Kingdom reiterated Friday that Moscow has nothing to do with the alleged poisoning of former Russian spy Sergei Skripal and his daughter.

Alexander Yakovenko was speaking at a press briefing in London following Sergei Skripal’s release from hospital, more than 10 weeks after the incident took place in Salisbury, England.

Yakovenko welcomed Skripal’s release, but claimed the UK would be breaking international law if it did not allow access to him and his daughter, Yulia, who was discharged last month.

Skripal, a 66-year-old former Russian intelligence officer, and his 33-year-old daughter Yulia were found unconscious on a bench at a shopping center in Salisbury on March 5.

Many Western countries accused Moscow of poisoning them with a nerve agent and then expelled a large number of Russian diplomats, incurring tit-for-tat retaliation from Moscow.

Moscow has denied any involvement in the case and demanded direct participation in the investigation.

Speaking at Friday’s briefing, Yakovenko said Russia has the right to contact the Skripals in accordance with the Vienna Convention on Consular Relations of 1963, but they have not been able to do so by now.

The convention he was referring to is an international treaty that defines a framework for consular relations between independent states.

“In the Vienna Convention 1963 and the person should see this personally. And we want to see him because for today nobody saw the pictures, nobody heard their voice, nobody saw whether they are alive or not. We don’t know. That’s why it’s under the Vienna Convention, we should be sure that the person is alive, he’s alright, or she’s alright and say, for example, I don’t need your services. It’s fine with us. So in this case, we will close the story. But for the time being, we don’t have access. So, that’s the problem,” Yakovenko told reporters.

Yakovenko said British Prime Minister Theresa May rushed to blamed Russia for poisoning the Skripals without conducting an inquiry, but he also pointed out the fact that early this month, Sir Mark Sedwill, May’s national security advisor, testifying to the House of Commons that the UK was yet to identify the source of the agent used against the Skripals, or even a suspect in this case.

He said that was a glaring contradiction in the British government’s statements on this matter.

“So, on one hand, Russia was blamed for doing something and then two months later, the very high official, head of the National Security Council, just said that they don’t have any suspects. From our point of view, this is the contradiction, and that supports our official version that Russia has nothing to do with this event,” said Yakovenko.

He said Britain’s accusation against Russia was politically motivated.