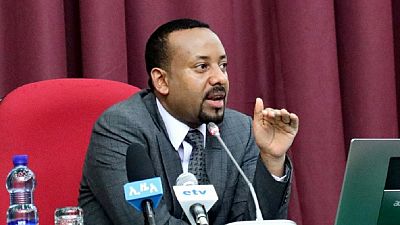 Ethiopia Prime Minister Abiy Ahmed has reiterated his stance on financial transparency in a meeting with top government appointees including members of cabinet.

The state-affiliated Fana Broadcasting Corporate reported that the premier disclosed at the meeting that his administration was not going to entertain any issues relating to corruption adding that it was currently investigating foreign bank accounts of some officials.

According to him, countries in question are cooperating with the government in the investigation.

The meeting of Tuesday May 15, said to be a half-day engagement, was aimed at finding ways through which officials could deliver results and respond public demands.

The premier is also said to have moved weekly cabinet meeting to Saturday from Friday as part of a move to avoid waste of time during working day.

Abiy took over from Hailemariam Desalegn, who resigned his post in mid-February to pave the way for implementation of political reforms in the country. Desalegn’s reign was marred by widespread anti-government protests.

Abiy, the first ethnic Oromo to rise to the post of Prime Minister under the ruling coalition, has continually promised to open the democratic space and to engage with political opponents.