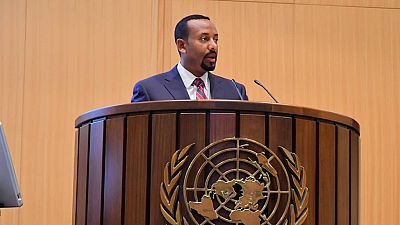 Prime Minister of Ethiopia Abiy Ahmed, has stated that the government is ready to ratify the African Continental Free Trade Area (AfCFTA) deal and deposit its instruments to the African Union.

Ethiopia he said was ready to follow the move by Ghana and neighbouring Kenya – who became the first countries to submit their documents to the A.U. last week. He further encouraged other countries to do same.

Whiles lauding the AfCFTA, Abiy described the deal as key to the continent’s development through creation of employment for its citizens. Ensuring diversification and the collective well being of especially women and the youth.

Abiy was speaking during an event organized by the United Nations Economic Commission for Africa (ECA). The Addis Ababa based commission is holding its 51st Session of Conference of African Ministers of Finance, Planning and Economic Development.

It forms part of wider consultations on the historic deal that was signed by presidents and government leaders in Kigali, Rwanda.

Other speakers at the event are ECA Executive Secretary, Vera Songwe, deputy Chairperson of the A.U. Commission, Kwesi Quartey and head of U.N. Habitat, Maimunah Mohammed Sharif. Representatives of other international finance institutions and governments are also at the event.

ECA Exececutive Secretary, SongweVera speaks on:
- #AfCFTA as subject of #2018Com discussions
- Role of #media as stakeholders in the #AfCFTA proecesses
- Expectations as ministers gather for #2018Com in #Addisababa #Ethiopian pic.twitter.com/QzsrrTNfFS

The AfCFTA is one of the biggest free trade bloc in the world, maybe only behind the World Trade Organization (WTO).

The signing of the AfCFTA by heads of governments and or their representatives is only a step in chasing an ambitious dream of uniting Africa at the level of commerce.

Experts and watchers say, the real work is yet to take off, all things being equal. The fact that after all this while, some countries decided to hold on to ratification is not as much a setback but speaks to the challenges that lay ahead.

Here are some key facts about the historic trade pact