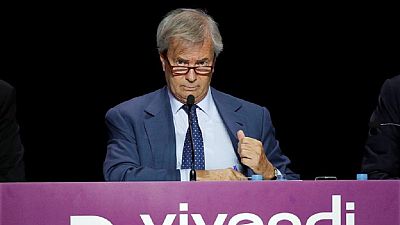 <p>A French judge on Wednesday placed tycoon Vincent Bollore under formal investigation over allegations his company undercharged for work on behalf of presidential candidates in two African nations in return for port contracts.</p> <p>Bollore’s company, Groupe Bollore, announced the decision by Judge Serge Tournaire, which came after Bollore had been questioned for two days by French fraud police.</p> <p>Bollore, whose logistics empire is a powerhouse in former French colonies across West Africa, is suspected of corrupting foreign public officials and complicity in corruption, his lawyer has said.</p> <p>The lawyer, Olivier Baratelli, has denied any wrongdoing by Bollore. “Vincent Bollore has been indicted by Judge Tournaire,” Groupe Bollore said in a statement.</p> <p>“Bollore, who continues to be presumed innocent, will now have access to this dossier (of evidence) whose content he had no knowledge of and will have the opportunity to answer these unfounded accusations,” it added.</p> <p>Although the company used the term indicted in its statement in English, the French term is usually translated as placed under formal investigation.</p> <p>A judicial source said Bollore, and Groupe Bollore’s Chief Executive Gilles Alix were placed under formal investigation for corrupting foreign public officials and complicity in breach of trust, forgery and use of forgery.</p> <p>The head of the international division at advertising group Havas Jean-Philippe Dorent was placed under formal investigation for breach of trust and forgery, and he is also assisting as a witness in the corrupting of a foreign public official, the source said.</p> <p>The judge’s decision means Bollore is now formally treated as a suspect and takes the legal process one step closer to trial. Under French law, however, a suspect is not formally charged with a crime unless he is sent to trial.</p> <p>Shares in Bollore closed down more than 2 percent on Wednesday after shedding 6 percent in the previous trading session.</p> <p>The probe involves two separate cases, one in Guinea and the other in Togo.</p> <p>Groupe Bollore confirmed on Tuesday its African business interests were under investigation over the billing for work carried out in Guinea and Togo between 2009 and 2010 by its communications business Havas Worldwide.</p> <p>The group denied any wrongdoing.</p> <p>Bollore, 66, was questioned by police alongside Alix, Dorent, and Francis Perez, the head of Spanish hotel and casino firm Pefaco, a judicial source said.</p> <p>Advertising company Havas was a subsidiary of Groupe Bollore at the time of the alleged corruption in 2010. It is run by Bollore’s son Yannick.</p> <p>Pefaco has wide interests in West Africa. Le Monde reported in 2016 that French fraud police had been investigating Pefaco for two years, and were interested in the relationship between Perez and Groupe Bollore.</p> <p>Asked what ties Pefaco had with Groupe Bollore, a Pefaco spokesman declined to comment. The spokesman also declined to comment on why Perez might be under investigation.</p> <p><strong><span class="caps">SPRAWLING</span> <span class="caps">EMPIRE</span></strong></p> <p>Billionaire Bollore transformed a family-run paper factory into a sprawling empire that spans the media, transport, logistics and telecoms through opportunistic investments and ruthless acquisitions.</p> <p>He counts presidents among his friends, including former French leader Nicolas Sarkozy. Havas is alleged to have advised Guinean leader Alpha Conde during his first presidential campaign in return for the Conakry port concession.</p> <p>In a 2016 interview in a luxury Parisian hotel, Conde told Le Monde of Bollore in an interview: “He is a friend. I favour friends over others. So what?”</p> <p>Conde is now midway through his second five-year term. A Guinea government spokesman on Tuesday told Reuters Groupe Bollore obtained the port concession “in strict compliance with the laws in force.”</p> <p>The investigation into Bollore’s activities in Guinea and Togo raises questions over whether other contracts won in the region by his holding company are under scrutiny.</p> <p>Groupe Bollore’s Bollore Africa Logistics has a strong grip on port operations in West Africa, holding 16 container port concessions, as well as several rail concessions. It employs 25,000 people.</p> <p>Groupe Bollore had revenues of 18.3 billion euros ($22.3 billion) in 2017 according to Thomson Reuters data.</p> <p>Bollore has launched numerous defamation complaints against media investigating his business activities, in a challenge to press freedoms, Reporters Without Borders said in its annual report on Wednesday.</p> <p><strong><em><span class="caps">REUTERS</span></em></strong></p>

Bollore, who continues to be presumed innocent, will now have access to this dossier (of evidence) whose content he had no knowledge of and will have the opportunity to answer these unfounded accusations.