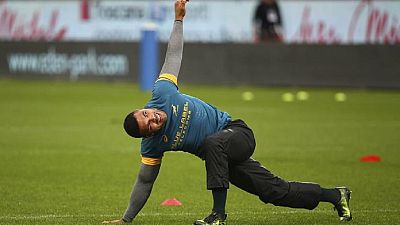 South Africa’s record try-scorer Bryan Habana announced Tuesday he was hanging up his boots after a glittering career at the end of his French Top 14 club Toulon’s season.

“The inevitable moment has come knocking on my door and I’ve welcomed it in for a drink.”

So at the end of this season, it's time to say goodbye and thank you to the game I so dearly love.

Knee-injury victim Habana, who last played for Toulon in April 2017, added: “It’s been more than a year of hoping, trying, pushing and willing to get back on the field for one last time, to taste the sweet victory or encounter that gut-wrenching despair.

“But it’s unfortunately just not to be. I, like most, would have liked my career to have ended differently, but sometimes things don’t turn out quite the way we hope for.

“So at the end of this season, it’s time to say goodbye and thank you to the game I so dearly love.”

He was hailed as “one of the greatest South African sportsmen of all time” by South African rugby federation chief Mark Alexander.

Habana arrived at Toulon for the 2013-2014 season, playing in two victorious European Cup teams as well as collecting a Top 14 title.

With 124 Springbok caps he is second in the all-time list only to Victor Matfield but holds his country’s record of 67 Test tries, the first coming against England at Twickenham in November 2004.

He played a critical role in South Africa’s 2007 World Cup triumph, scoring a record-equalling eight tries but his Springbok career ended on a low note in Florence in November 2016 with a historic maiden 20-18 loss to Italy.

“As a player, Bryan has set the bar incredibly high for succeeding generations,” Alexander added on the federation’s website.

“He has left behind a legacy of discipline, leadership and professionalism. He and his family can be very proud of all that he has achieved.”

Habana has struggled to force his way back into the Toulon side after undergoing knee surgery last year.

Waking up and feeling properly overwhelmed by all the well wishes, kind words, love and appreciation. I’ll be taking it all in as I support my RCTofficiel brothers finish the season. My sincere gratitude, appreciation and respect ??