Opposition walks out as Sierra Leone elects speaker of parliament 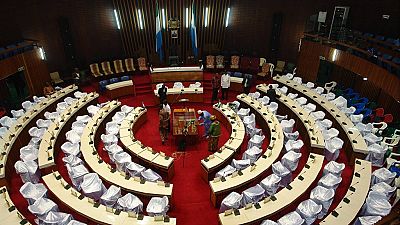 Dr. Abass Chernoh Bundu of the ruling Sierra Leone People’s Party (SLPP) has been elected as Speaker of the 5th Parliament of the Republic of Sierra Leone.

The former ECOWAS Secretary General was elected unopposed as members of the main opposition All People’s Congress party (APC) were not present in the House to participate or nominate a candidate for the election of the Speaker.

The APC legislators boycotted the vote after 16 of their colleagues were asked to leave the chamber because of high court injunctions issued against them on Monday.

The APC is the biggest party in parliament with 68 seats against the ruling party’s 49, but it lost the presidency to Julius Maada Bio of the SLPP.

Earlier, the session which had swearing in of the new MPs and election of the speaker and his deputy as the order of business for the day, was adjourned after fighting broke out as APC members protested the decision to bar some of their members from voting.

Meanwhile the election of the Deputy Speaker has also been concluded with the SLPP’s Sengehpoh Solomon Thomas getting the post. 72 out of 76 lawmakers present voted to him, he was also unopposed in the process.