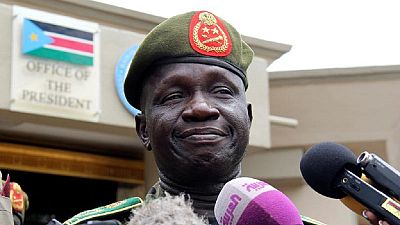 South Sudan’s army chief died on Friday, the government said, in a development that further complicates the running of President Salva Kiir’s administration amid a four-year-old civil war.

General James Ajongo died in Cairo after a short illness at the age of 64. He had joined the Sudan People’s Liberation Army (SPLA) in 1983, when it was still a rebel group fighting for independence from Sudan.

“It is with a heavy heart that I announce the untimely death of Gen. James Ajongo Mawut, SPLA army’s chief of defence force,” government spokesman Michael Makuei Lueth said.

Kiir now has to manage the competing interests within a sidelined military even as he faces ramping external pressure from the Trump administration and increasingly fractious coalition politics in his own government.

He was appointed to the position after his predecessor Paul Malong was sacked early last year amid resignations by some generals who alleged abuses by the military and tribal bias in the army ranks.

Malong has since formed his own organisation to challenge President Salva Kiir, accusing him of looting the country’s resources and turning it into a failed state.

“Kiir now has to manage the competing interests within a sidelined military even as he faces ramping external pressure from the Trump administration and increasingly fractious coalition politics in his own government,” he said.

“Meanwhile, Ajongo’s predecessor is trying to start a new rebellion and still has many friends inside the military.”

South Sudan, which obtained independence from Sudan in 2011 and is the world’s youngest nation, has been mired in civil war since 2013 when Kiir fired his deputy Riek Machar.

Tens of thousands of people have been killed in a conflict that has often been fought along ethnic lines, and much of the nation has suffered dire food shortages.

The fighting has slashed oil production and driven about a third of the population of 12 million from their homes.

The U.N. refugee agency estimates 3.1 million will be refugees in neighbouring countries by the end of this year.

On Wednesday, the East African bloc of nations IGAD said it had postponed this month’s talks on implementing the latest proposed peace deal.

The bloc said last month Machar should be released from house arrest in South Africa as soon as possible, on condition that he renounces violence.