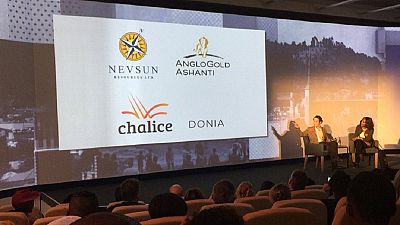 An Eritrean journalist and activist, Meron Estefanos, says multinational mining firms in the country are complicit in the current regime’s dictatorial rule.

The Sweden-based advocate mentioned four main firms, Nevsun Resources, Anglogold Ashanti, Chalice and Donia as companies that were bankrolling the dictatorship back home. In her view, their continued operation and dealing with a repressive government amounted to complicity.

Speaking earlier this week at the Oslo Freedom Forum (OFF) held in Johannesburg, Meron asked why these multinationals will want to be accomplices in repression.

She also spoke about issues relating to the absence of human rights, the muzzling of media. According to her, the independence movement of years back had metamorphosed into a military dictatorship.

.meronina speaks about how the independence movement in Eritrea became a military dictatorship. #OFFinJoburg pic.twitter.com/RvhigIhe4t

Her several reports on human rights forcing young Eritreans to flee home due to compulsory national service and harsh economic conditions has often been dismissed by the government.

She is head of a non-governmental organization, the Eritrean Initiative for Refugee Rights (EIRR), the group offers assistance to asylum seekers who flee home in search for greener pastures.

The OFF held its first event away from Norway in South Africa’s Johannesburg. It worked along with the Nelson Mandela Foundation to pool together persons working in furtherance of freedoms across the world.