To vote or boycott? Egyptians urged to participate in election as 'a national duty' 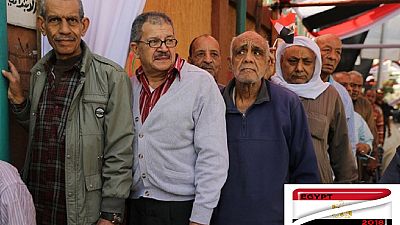 The Egyptian National Elections Authority (NEA) has said it hopes for more voters to turnout in the remaining two days of the presidential election.

While the NEA spokesman Mahmoud El-Sherif did not provide an official turnout figure from the first day of voting, he did indicate that turnout was highest in Cairo, Giza, Alexandria, Sharqiya, and North Sinai governorates.

El-Sherif called on citizens to ignore calls to boycott the presidential vote, adding that the first day had shown that Egyptians had not responded to such calls. He said that such calls were in the interest of “those who hate” Egypt.

“The Egyptian citizen will not abandon his country, his duty, and God willing, tomorrow and after we will update you with more,” El-Sherif said.

Celebrities and public figures have also been urging Egyptians to take part in the election, saying it is national duty.

“Even if any person disagrees with the current regime or the country’s situation, he should exceed that and participate in the election for the country’s interest,” stressed T.V. host Amr Adib during his program on ON E channel on Monday.

About 60 million Egyptians are eligible to vote in the ongoing polls to elect the country’s next president, in a race pitting the incumbent president Abdel Fatah Al Sisi against El Ghad party chairperson Moussa Moustafa Moussa.

Local news portal, Egypt Today has reported that calls for boycotting the election have been trending on Twitter using an Arabic hashtag that translates to ‘Do Not Go Out’.

But some argue that the calls for boycott will not be effective as was demonstrated in the 2012 constitutional referendum, the 2012 and 2014 presidential elections where voter turnout was 32.8%, 52% and 47.5% respectively.

The final results of the first round of the election will be announced on April 2.

If there is a need to hold a run-off round, the Egyptian expatriates will cast their vote again on April 19-21. The final 2018 presidential election results are expected to be announced on May 1.