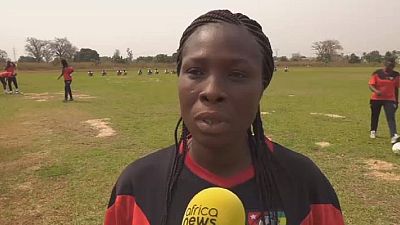 On this football field, there are only women. It’s not unusual, but what’s exceptional is that the coach is actually a female.

And it’s a first in Togo. Kai Tomety is first female coach of the Togolese national women’s football team.

A passionate footballer, Kai Tomety is one of the pioneers of women’s football in Togo and has been one of the best players in her country.

We are going to assume responsibility and prove that what men do, women can also do, especially since at the moment we are talking about gender equality and women's emancipation.

‘‘We are going to assume responsibility and prove that what men do, women can also do, especially since at the moment we are talking about gender equality and women’s emancipation.We’re going to give the best of ourselves so that we can do the work and satisfy Togolese people and those who have trusted us’‘, Kai Tomety told Africanews.

The players are delighted with this nomination. And her male colleagues could not agree more.

‘‘I am very pleased that she is here with us. She’s giving us the best she can’‘,said midfielder Akossiva Dobga.

‘‘I think Mrs. Kai was the head of the team since then and I think that women’s football has had a lot of problems that in reality, she has to make a lot of things better. Today she’s here, I think she has to do a good job’‘,Pouli said.

Kaï Tomety is aware of the difficulties ahead but is hopeful of setting up a competitive team.

Her first task was to lead the National Women’s Team at the West African Union Tournament B Women’s Cup which took place in Abidjan, Côte d’ Ivoire from 14 to 24 February.