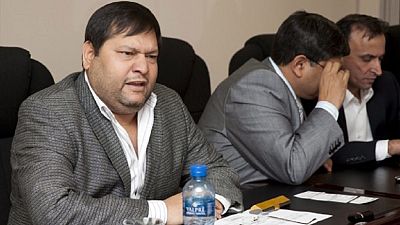 The stakes for the capture of fugitive Ajay Gupta have been raised with South African billionaire Magda Wierzycka upping the bounty on his head.

Early on Saturday morning Wierzycka tweeted that she would match the current bounty “Rand for Rand”.

On Thursday after the Hawks announced that Gupta was on the run‚ private forensic investigator Paul O’Sullivan announced a R200‚000 reward for his capture. On Saturday he offered another R300‚000 for the location of Gupta’s brothers‚ Atul and Rajesh Gupta‚ and Duduzane Zuma‚ the Guptas’ ally and son of former president Jacob Zuma.

While the chances of the Guptas having caught commercial international flights out of South Africa are a low probability‚ the chances of them having used private means to go to places like Swaziland or Lesotho are high. They may still be stuck there.

The Guptas are said to be protected by an army of heavily armed bodyguards who are reported to continuously move them between safe houses.

Wierzycka‚ speaking to TimesLIVE‚ said she was now offering an additional R200‚000 to the first bodyguard‚ who was with Ajay Gupta‚ who alerted the authorities to his whereabouts.

“There are people around them who are protecting them. We are wanting to provide incentives to people who know where they are‚ and to people who are actively helping them‚ to do what is right and turn these guys in.

“While the chances of the Guptas having caught commercial international flights out of South Africa are a low probability‚ the chances of them having used private means to go to places like Swaziland or Lesotho are high. They may still be stuck there.

She said as well as offering a reward to the bodyguards‚ she was also offering R200‚000 to the first of the accused in the Estina Dairy Farm project case who turned state witness.

On Thursday‚ the Guptas’ nephew‚ Varun Gupta‚ along with the family’s allies‚ Nazeem Howa‚ Ashu Chawla‚ Ronica Ragavan and Kamal Vasrum‚ appeared in the Bloemfontein Magistrate’s Court on charges of fraud and theft and for allegedly contravening the Organised Crime Act and Public Finance Management Act.

The eight were caught for allegedly stealing R220-million from the Estina project‚ which was established to help indigent farmers in the Free State towns of Vrede and Warden. The project was the brainchild of former Free State agriculture MEC‚ Mosebenzi Zwane‚ who is the current mining minister.

Wierzycka said the R200‚000 she was offering would go to the legal fees of the first of the eight accused who became a state witness against their co-accused.

“The accused who turns state witness will definitely need help with their legal fees.”

She said in total she was offering R900‚000 in rewards‚ but would potentially raise this amount‚ “as things evolve”.