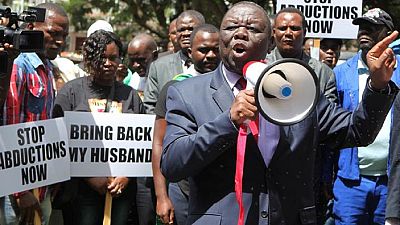 Zimbabweans have criticised the government for refusing to declare Morgan Tsvangirai a National Hero, even as his opposition Movement for Democratic Change (MDC-T) party declared him a ‘people’s hero’.

President Emmerson Mnangagwa, who is constitutionally mandated to designate hero status upon any deceased citizen of Zimbabwe who is well deserving on account of his outstanding, distinctive and distinguished service to Zimbabwe’, said Tsvangirai will get a sate assisted funeral.

Several Zimbabweans had asked that the fallen veteran politician is given the hero status for his brave fight championing democratic values in Zimbabwe.

I wish to strongly endorse public sentiment that the late Morgan Tsvangirai be granted national hero status and be laid to rest at the National Heroes Acre.

Mnangagwa however agreed that Tsvangirai had fought to ensure that there was democracy in Zimbabwe and added that the former prime minister had helped to shape the country’s political landscape.

The party’s acting president Nelson Chamisa described Tsvangirai as an icon and said Tsvangirai would be buried at his Buhera rural home in accordance with his will.

Harare turns RED as thousands pay tribute to the doyen of democracy pic.twitter.com/IIUBWaLqIF

On social media, many expressed their disappointment in Mnangagwa’s government, arguing that he had lost a remarkable opportunity to unite the country.

No hero status for Morgan Tsvangirai! ZANU PF never changes so don't think ED will ever change. Nothing they say is true! Trust them at your own peril!

Our Flag is supposed to be flying at half mast!! Dear Mr President we are watching Dr #Tsvangirai is a Hero in our eyes. He fought the good fight and fought for democracy. A former Prime Minster who must be declared a Hero. This flag nor Heroes Acre does not belong to ZANU PF!!

Morgan Tsvangirai will be laid to rest in Buhera, his rural home. He's a people's hero and nobody can take that away from him. RIP Save.

Many accused the government of turning the National Heroes Acre where ‘deserving citizens’ are buried into property of the ruling party.

Some of the heroes that have been given the status and laid to rest at the Heroes Acre there include the Patriotic Front guerrillas killed during the Rhodesian Bush War and prominent ZANU-PF politicians or sympathisers who passed on during Robert Mugabe’s 37 year reign.