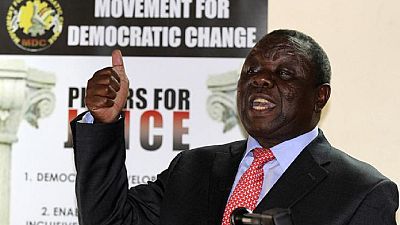 Hundreds of mourners have gathered outside the Movement for Democratic Change -T (MDC-T) party headquarters following news of the death of its leader, opposition veteran Morgan Tsvangirai.

An executive meeting of the party leadership is also underway, called by the acting party president, Nelson Chamisa.

Chamisa earlier tweeted, asking party members to set aside differences and unite to send off ‘our hero’.

‘‘The tragic passing on of Pres MT is a huge blow to the party and the nation. As a party of excellence, we will unite,be disciplined & honour our hero,’‘ Chamisa tweeted.

The tragic passing on of Pres MT is a huge blow to the party and the nation. As a party of excellence, we will unite,be disciplined & honour our HERO.A special Executive meeting 10.Presser 11am Harvest house.

Chamisa, a vice president to the deceased party president was appointed acting president of the MDC-T on Monday, until the return of Tsvangirai.

The decision was contested by the other vice presidents Dr. Dr Thokozani Khupe and Eng. Elias Mudzuri.

Before leaving for South Africa where he eventually succumbed to colon cancer, Tsvangirai had appointed Mudzuri as acting party president and Chamisa as his representative in the opposition coalition MDC Alliance.

The opposition coalition had agreed to front Tsvangirai as the coalition’s presidential candidate in the forthcoming election.

Zimbabwe’s president Emmerson Mnangagwa led African leaders and admirers of the fallen stalwart have taken to social media to share their condolences and tributes.

I have learnt of the passing of former Prime Minister Morgan Tsvangirai with deep sorrow. Morgan dared to dream of democracy, freedom and justice for his country and his people despite the firm hands of dictatorship that held sway. pic.twitter.com/zQJpCLc8pt

Go well and rest in power, Morgan Tsvangirai. His steadfast courage and willingness to stand tall against one of the most repressive regimes on the African continent should be applauded. He pushed #Zimbabwe‘s pro-democracy struggle further than anyone. He will be missed by many.

Morgan Tsvangirai represented courage and determination in the face of oppression, and gave ordinary Zimbabweans faith to believe in the future. He was one of the bravest political leaders of his time and will be sadly missed.

Morgan Tsvangirai, A doyen of democracy and justice in our time. Thank you for making it possible for people like me to find the courage to say ENOUGH IS ENOUGH, HATICHADA, HATICHATYA. Zimbabwe owes you a great debt. REST IN POWER mukuru #RIPMorganTsvangirai hambani kahle pic.twitter.com/wGICnsZGdZ

May his soul rest in power! pic.twitter.com/tvsMGIzwoY

Kenya condoles with the people of Zimbabwe, we pray that God comforts and strengthens the family and friends of the late Dr Morgan Richard Tsvangirai. edmnangagwa EngMudzuri

I wish to strongly endorse public sentiment that the late Morgan Tsvangirai be granted national hero status and be laid to rest at the National Heroes Acre.