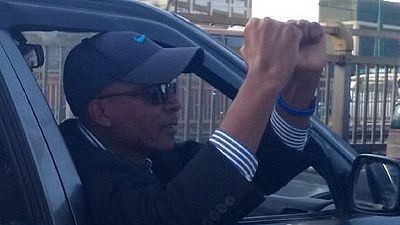 Ethiopian journalist and blogger, Eskinder Nega has finally been released from a prison facility after seven years in jail, a top Oromo activist has said. His release comes barely a week after reportedly refused to sign a ‘false confession form’ in exchange for his liberty.

Eskinder, who has been in jail since 2001, convicted of having links with banned groups, was among the over 740 prisoners who were set for release by the federal government as part of political reforms announced in January 2018.

The Committee to Protect Journalists (CPJ) quoted Eskinder’s wife, Serkalem Fasil, saying that at 11am, local time late last week, a prison official asked Eskinder to sign a form which falsely stated that he was a member of Ginbot 7, an organization that the government deems a terrorist group.

Fasil said her husband refused to sign and asked to see a more senior official subsequent to which he was returned to his cell.

AS’s favorite pictures so far. #EskinderNega being escorted to the car by Journalist Temesgen Desalegn, who was recently released after finishing his term; #AndualemAragie smiling and our hard working jurno Mahlet Fasil (MahletFasil) getting her best moment with her icon. ?? pic.twitter.com/gwVB18wwQ5