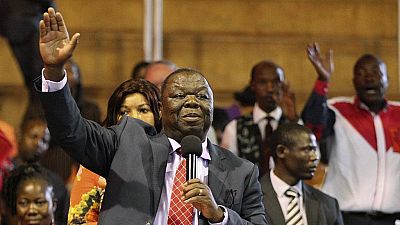 The succession struggles in Zimbabwe’s opposition Movement for Democratic Change – Tsvangirai (MDC-T) party have intensified after one of the vice presidents contested the party leader’s appointment of Nelson Chamisa as interim leader.

Morgan Tsvangirai’s spokesperson Luke Tamborinyoka released a statement on Wednesday that announced the appointment of Chamisa as interim party leader.

However, MDC-T vice president Dr Thokozani Khupe, who was elected to the position by the party’s congress in 2014 took to Twitter to express her unwillingness to submit to the leadership of Chamisa.

MDC-T cannot afford the ZANU-PF politics of rhetoric, self-help and free for all power take overs and decision making. We need a constitutionally ordered way of presenting ourselves to the voters.

Describing those coveting the top position in the party as ‘those with hidden agendas’, Dr. Nkupe posted a series of tweets laying out her constitutional right to take over the leadership of the party in case the party leader is incapacitated.

3/6 Three consecutive MDC-T congresses have elected yours truly as Deputy President to President mrtsvangirai & other officers primarily to avoid a leadership vacuum at such an eventuality, & to shut any that may be artificially created by those with hidden agendas.

4/6 I was MDC-T A/President for months in 2008 on the basis of our constitution which has remained unchanged & clear on the roles of elected officers of congress. It does not give any extensive powers to any one office bearer such that without them the party is dysfunctional.

5/6 Those of us sincerely concerned about the Zimbabwean voters & their MDC-T must impress upon the 2014 congressionally elected leadership at their level to take decisive corrective measures against the use of president mrtsvangirai's name to propagate unconstitutional-ism.

‘‘MDC-T cannot afford the ZANU-PF politics of rhetoric, self-help and free for all power take overs and decision making. We need a constitutionally ordered way of presenting ourselves to the voters,’‘ she concluded.

While the opposition coalition MDC Alliance has already endorsed Tsvangirai as it’s presidential flag bearer in the upcoming elections, it is the leadership of the member MDC-T party that is unsettling the opposition.

The succession struggles can be traced back to 2016 when Tsvangirai appointed Elias Mudzuri and Nelson Chamisa as party vice presidents to serve alongside the elected Dr. Nkupe.

All three vice presidents have served in acting capacity as party leader and have different factions backing them to take over from the ailing party leader.

Zimbabwe will be having general elections this year, and the presidential race will be the first that the country will have without Robert Mugabe on the ballot.

Mugabe, who led the country since its independence in 1980 was ousted in a military takeover last year in November and replaced by Emmerson Mnangagwa.

Mnangagwa has been named by the ruling ZANU-PF party as presidential flag bearer and will be keen to gain legitimacy by winning a free, fair and credible election.

A divided opposition would play right into the government’s hands.