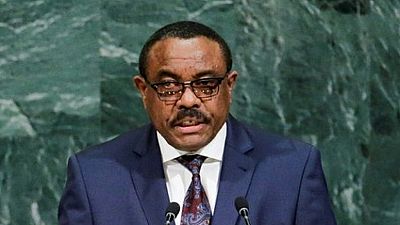 Ethiopia’s Prime Minister Hailemariam Desalegn has rejected a call by Egypt for World Bank arbitration in a dispute over a hydroelectric dam Addis Ababa is building along its share of the Nile.

The two countries are at odds over the construction of the Grand Ethiopian Renaissance Dam, with Cairo fearing the project would restrict waters flowing down from Ethiopia’s highlands and through the deserts of Sudan to its fields and reservoirs.

The Horn of Africa country, which aims to become the continent’s biggest power exporter, says the $4 billion-dam will have no such impact.

Seeking professional support is one thing, transferring (arbitration) to an institution is another thing. So we told them that this is not acceptable with our side.

With discussions deadlocked for months over the wording of a study on its environmental impact, Egypt’s Foreign Minister Sameh Shoukry proposed late last month that the World Bank be allowed to help settle the dispute.

“Seeking professional support is one thing, transferring (arbitration) to an institution is another thing. So we told them that this is not acceptable with our side,” the state-run Ethiopian News Agency quoted Hailemariam as saying.

The agency, which spoke to Hailemariam upon his return from Cairo on Friday, said he rejected the proposal and said: “It is possible to reach agreement … through cooperation and with the spirit of trust”.

After his meeting with the Ethiopian leader, Egypt’s President Abdel Fattah al-Sisi pledged not to let differences over a construction of the dam ruin relations with Addis Ababa.

Countries that share the river have argued over the use of its waters for decades – and analysts have repeatedly warned that the disputes could eventually boil over into conflict.

Among the questions Ethiopia and Egypt disagree about is the speed at which the dam’s reservoir would be filled.

It is among an array of projects being built. Under a new 2015-2020 development plan, Addis Ababa wants to raise power generation to 17,346 MW from a current capacity of just over 4,300 MW from hydropower, wind and geothermal sources.