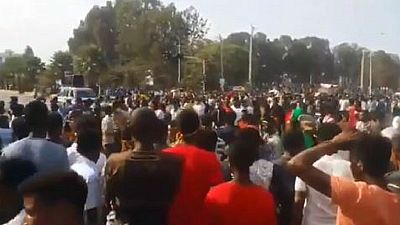 There is still tension arising from deaths reported in Ethiopia’s Amhara region after security forces shot and killed a number of protesters on Saturday.

Hundreds of people have taken to the streets a day after the incident to protest against the security action that led to the deaths. The Reporter news portal in Ethiopia says it had reports that gunshots were still being heard in the town of Woldiya.

A local portal, the Addis Gazetta shared a phot that showed people on the streets of Woldiya where the incident took place. It is located about 510 km away from the capital, Addis Ababa.

The young people who were singing and dancing as they marched through the town as part of a religious event changed their songs to anti-government chants and songs leading to the clash and subsequent deaths.

The casualty figure, which ranges between five and over a dozen, is said to be rising according to local news sources. Federal security forces reportedly opened fire on young people who were partaking in a religious ceremony, the Epiphany.

The spokesperson of the Amhara region confirmed the deaths and added that there was a probe underway to ascertain the true facts on the issue. Perpetrators will be brought to book, he added.

Reports say there has been heavy federal and regional security forces in Amhara state since last December following skirmishes at a football match. The region also experienced disturbances in its universities in what was described as ethnic-based attacks.

Amhara located in the country’s north was along with Oromia, the heart of anti-government protests that shook the country between 2015 and much of 2016. The protests led to an October 2016 state of emergency lifted in August 2017.