Residents of Cape Town will have to cut their water consumption by 40% from February 1st ,as the second largest city in South Africa is struck by its worst drought in a century.

Cape Town Mayor ,Patricia de Lille who announced this on Thursday said ,if these new restrictions are not respected and the region does not record significant rainfall, water will no longer flow to the taps from April 21.

She added that the population will be forced to line up at water distribution points. .

Despite our insistence for months, 60% of people in Cape Town use more than 87 liters of water a day, and we must assume that they will not change their behavior.

“We reached a point of no return,” said Mayor Patricia de Lille during a press conference in Cape Town.

“The crisis has reached a seriousness that requires a new series of emergency measures,” justified Ms de Lille. From February, residents will have to limit their daily water consumption to 50 liters, compared to 87 currently.

City Council must approve Friday an increase in water rates for offenders.

On average, 15 liters of water are consumed for a one-minute shower or flush toilet.

“Despite our insistence for months, 60% of people in Cape Town use more than 87 liters of water a day, and we must assume that they will not change their behavior,” said the city’s mayor.

“It is very likely” that residents will be without water at their taps from April 21, called “Zero Day”, again warned Patricia Lille.

Since the beginning of 2016, water consumption in Cape Town has been reduced by almost half, but it is now stagnating at around 620 million liters per day, or 100 million liters above the target set by the municipality.

Next week, the municipality must announce the 200 collection points where the inhabitants will be able to obtain 25 liters of water per day starting from “Zero Day”.

Cape Town, popular with tourists, has been hit for three years by a terrible drought. Dams only contain 16% of usable water.

All of southern Africa has experienced a very severe drought in recent years, aggravated by the cyclical El Niño weather phenomenon. But very heavy rains in recent months have allowed most of the region to redo its precious water reserves.

The Cape region, however, was an exception, receiving most of its rainfall from May to August. 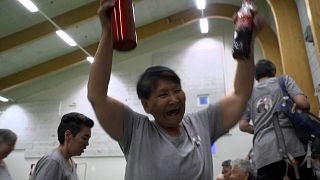