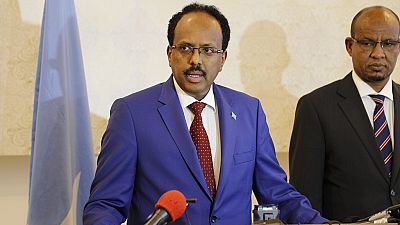 It was not immediately clear who had carried out the air strike but the United States frequently conducts such attacks to bolster Somalia’s army in its fight against al Shabaab.

A local government official told Reuters the strike occurred in Ilimey village, about 130 km (80 miles) southwest of Mogadishu. The area is mostly controlled by al Shabaab.

The target, he said, was a car used by the militants to transport supplies to a squad preparing bombs.

“The strike hit the car … but we do not know details of casualties,” Ali Nur, deputy governor of Somalia’s lower Shabelle region told Reuters.

But Mohamed Abu Usama, al Shabaab’s governor for the same region, denied that al Shabaab personnel had been attacked and instead said the strike had killed civilians.

“The strike hit a makeshift tea shop and thus killed 7 civilians and injured three others,” he said.

Somalia has been trapped in chaos and lawlessness since 1991 when dictator Siad Barre was toppled.

Al Shabaab wants to topple the Western-backed central government and establish its own rule based on its strict interpretation of Islam’s sharia law.

An African Union peace keeping force AMISOM pushed the group from Mogadishu and other former strongholds.

But the Islamists remain a formidable force, carrying out frequent bombings and other assaults on AMISOM, Somali army and civilian targets.

In October over 500 people died in one of Somalia’s deadliest bombings when a truck bomb exploded outside a busy hotel at Mogadishu’s K5 intersection lined with government offices, restaurants and kiosks.