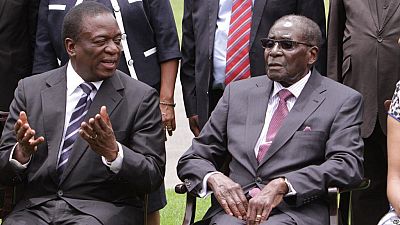 Ousted Zimbabwean vice president Emmerson Mnangagwa added his voice on Tuesday to those demanding 93-year-old President Mugabe to resign, saying he needed to heed the “clarion call” of his people and step down.

Mnangagwa, who said he fled Zimbabwe because of a threat to his life after being purged from the ruling party, said he had been in contact with Mugabe and invited to return but would not do so until his personal security could be guaranteed.

Pressioni crescenti BBC and thought you should see it:

“I told the President that I would not return home now until I am satisfied of my personal security, because of the manner and treatment given to me upon being fired,” he said in a statement.

“The security services are encouraged by new developments which include contact between the president and the former vice president comrade Emmerson Dambudzo Mnangagwa who is expected in the country shortly. Thereafter the nation will be advised of the outcome of talks between the two,” said army chief general Constantino Chiwenga.

Last Friday, a senior aide who declined to be named said Mnangagwa had returned to Zimbabwe the day before, after spending nearly a week abroad.

Emmerson Mnangagwa turns down invitation to travel to Zimbabwe for meeting with Mugabe at Statehouse. Calls on Mugabe to resign and says impeachment must proceed #Zimbabwe ?? pic.twitter.com/hTRJiw7pn4

Zanu-PF’s chief whip said on Monday that it had support, pledged from 230 of about 260 of its members, to go ahead with impeachment proceedings against President Robert Mugabe on Tuesday.

Lovemore Matuke said the party would try to wrap up the impeachment proceedings as soon as possible this week, but added that it was likely to take three days.