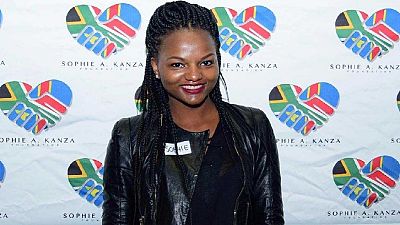 As some African countries embrace the idea of open borders with visa-free travel on the continent, mental borders remain in the minds of some Africans.

The activist Sophie Kanza created a short film about a subject we rarely talk about: xenophobia that sometimes exists between Africans. It’s called “We are Human”, and won an award at the UN sponsored Plural + Film Festival.

Can you tell us more about the foundation you’ve created?

I’m the co-founder of an NGO called Sophia A Kanza Foundation created with my sister Louise.

Everyone wants to go to Europe, but we Africans, need to travel more in our continent

It is a safe space where people can be united in diversity. Many times when African immigrants come to South Africa they stick together because they’ve heard of horror stories about xenophobia.

Have you experienced discrimination in South Africa?

My sister and I came to South Africa when we were three and two. Being an African immigrant, there was always discrimination that we’d face.

There is a culture in South Africa that immigrants do not belong and they should all go back, and that all they’re doing is leeching on the resources and stealing jobs.

They are very oblivious to the plight of migrants and refugees in their own country. They think that we benefit from grants and government funding and things like that, which is incorrect.

There’s a number of stereotypes that come with being an African immigrant in South Africa. There is a lot of black on black violence, but they wouldn’t treat Europeans or Americans like that.

When we were young and we went through all that we didn’t say much. Yes, it hurts, but we just let it go. But as we got older, it got worse. And when we happened to have this platform, we decided that we needed to say something.

Because a lot of us are a “limbo generation”. For example for me, I’d be too Congolese to be South African and too South African to be Congolese. I came here as a toddler so I didn’t have a choice in the matter. A lot of us don’t have a concrete feeling of a home. So with this project we just wanted to give those migrants a voice.

Instead of seeing us as brothers and sisters, they see us as threats. They can see that our work ethic and our need to succeed is very high because of where we come from and because of the realities of our home countries. So it’s quite tough because a lot of immigrants will take a job even if they are underpaid, because they have nothing else. When you come here with nothing, you will take whatever is given to you.

According to you, what can help tackle xenophobia amongst Africans ?

I think it all starts with education. A lot of South Africans do not know African history at all.In school, not one day, would you be in class and they would discuss African history. You’d never hear about Sankara, Lumumba, etc. Only at university level you would start learning about African history. But what is the percentage of the population that goes to university ?

We need to become educated and open up. And we need to have more campaigns where we talk about these things like « We are human ». It’s the first ever campaign where actual African immigrants speak of their experiences. It’s always other people who speak on our behalf. We are not represented especially as the youth. Changing the mind and the conception of the youth is important because they have the ability to change the future.

Many African countries have adopted a free visa policy for African nationals. What’s your opinion on that ?

I think that the no-visa rule is amazing because traveling allows us to open up. Nine out of ten times you’d meet a South African who’s never ever been out of South Africa but they hate Nigerians because of the people they have interacted with.

We need to travel around our continent and encourage travel in the continent. Everyone wants to go to Europe but there isn’t mass campaign that encourages travel and interconnectedness of the continent.

But free visa is not something that is going to happen anytime soon here in South Africa. The immigration system is ridiculous. They keep bringing new laws that institutionalize xenophobia. To get a South African visa has become extremely difficult for African nationals.