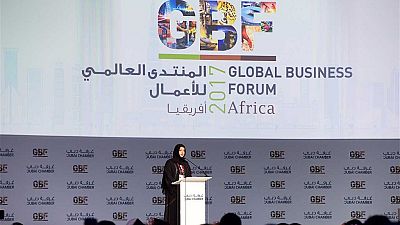 Expo 2020 Dubai will offer an opportunity to take UAE-Africa relationship to new heights, UAE Minister of State for International Cooperation and Director General of Expo 2020 Dubai, Reem Al Hashimy, invited delegates during a special address at the 4th Global Business Forum on Africa in Dubai.

The session was attended by Sheikh Mohammed Bin Rashid Al Maktoum, Vice President and Prime Minister of the UAE and Ruler of Dubai; Paul Kagame, President of Rwanda; and Yoweri Museveni, President of Uganda.

Al Hashimy highlighted the fact that the UAE and Africa share historic trade ties, and pointed out that the late Sheikh Zayed Bin Sultan Al Nahyan, the UAE’s founding father, travelled to Africa decades ago to strengthen political bonds that would serve future generations.

She stated that the UAE is strategically located between Africa and Asia where the fastest growing economies of the world today can be found.

She encouraged delegates to continue to work toward new partnerships and friendships so that the UAE and Africa can celebrate their joint achievements and build a legacy which future generations can be proud of.

The 4th Global Business Forum on Africa was organised by the Dubai Chamber of Commerce and Industry under the theme: “Next Generation Africa”.

The forum explored opportunities to increase cooperation and boost trade and investment ties between the Middle East and the African continent.

The Global Business Forum series, launched by the Dubai Chamber of Commerce and Industry in 2013, focuses on Africa, the Commonwealth of Independent States (CIS) and Latin America.

To date, the series has hosted 10 heads of state, 74 ministers and dignitaries, and 5,400 executives, as well as a host of influential decision makers from 65 countries around the world.