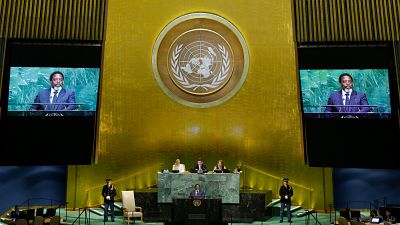 The notion that elections would most probably not be held before the end of 2017 has led to the “re-emergence of a climate of political uncertainty” and tension in the Democratic Republic of the Congo (DRC), a United Nations envoy for the country told the Security Council on Wednesday (October 11).

Maman Sidikou explained that the broad consensus achieved among key political actors with the signing of the 31 December 2016 Agreement has not been maintained consistently throughout the year.

“Recently, discussions have centred on the notion that elections would most probably not be held before the end of 2017, as had been foreseen in the political agreement. This has generated renewed political discourse around varying interpretations of the 31 December Agreement, particularly the implementation of the transitional arrangements moving forward. This has also, regrettably, led to the re-emergence of a climate of political uncertainty and tensions,” he added.

Congo’s electoral commission, CENI, said in a statement following a meeting with civil society representatives on Tuesday (October 10) that it would need at least 504 days to organize the poll once voter registration is completed.

Enrolment began in parts of Kasai, a region ravaged by insurrection, in mid-September and will take about three months, the commission says. That means the vote could not be organized until April 2019 at the earliest.

CENI is expected to announce election dates this month.

An insurrection in Kasai has killed up to 5,000 people and displaced 1.4 million since August 2016, and militia violence has also spiked in the eastern borderlands, where dozens of armed groups are active.

“I strongly condemn attacks by the Kamuina Nsapu militia, the recruitment of children, and the targeting of schools, churches, and other protected sites. I also denounce the disproportionate use of force and the deliberate targeting of civilians attributed to the Congolese armed forces. Violence must stop, and its perpetrators must be held accountable,” Sidikou.

Sidikou also told the U.N. Security Council that CENI was badly underfunded. International donors have contributed only 6 percent of the $123 million that the United Nations had been expecting.

“At the present time, the publication of a realistic electoral calendar, the establishment of a budget for the holding of elections, the implementation of pacification measures, and insuring the respect of fundamental rights and freedoms are the main conditions to advance the political process,” he said.

Congo’s opposition suspects that president Joseph Kabila is trying to cling to power by postponing elections until he can find a way to remove term limits that prevent him from standing for re-election, as presidents in neighbouring Rwanda and Congo Republic have done.

Kabila, who took power after his father Laurent Kabila was assassinated in 2001, denies that, and says the election delays are due to difficulties enrolling millions of voters and mobilizing hundreds of millions of dollars in financing.

But opposition have warned that a delay in polls would cause an impatient population to “take matters into its own hands”.

Addressing the Security Council, Congolese Foreign Minister Lèonard She Okitundu said DRC is party to the international pact on civil and political rights, however the pact “does not make these freedoms absolute.”

“In our country when some people are looking for a rebellion and want to have a demonstration and call for a rebellion within that manifestation, obviously, this does not follow under democratic freedom of expression. The necessity to maintain public order and public safety here takes precedence over exercising these freedoms,” Okitundu said.

Congo has never experienced a peaceful transition of power and Kabila’s refusal to step down has fueled mounting insecurity across a country where millions died in regional conflicts between 1996-2003, most from hunger and disease.