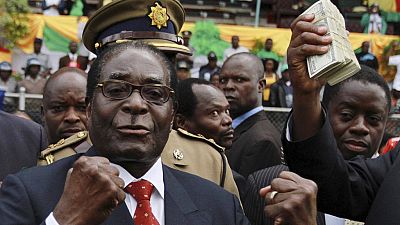 The 72nd United Nations General Assembly week has been characterized by controversies in Zimbabwe over the expenditure of President Robert Mugabe’s sons in Harare and New York.

Grace Mugabe’s son Russell Gorereza welcomed two new luxury cars to his fleet of vehicles last Friday, and were spotted in the streets of Harare as well as flaunted in a leaked video drawing lots of criticism online.

As #GraceMugabe son admires his new luxury cars the Welfare minister says more than 72,3% of the population are living in abject poverty. pic.twitter.com/KU0zuJU7at

The cars are an addition to his several luxury cars including a Porsche Cayenne‚ 2017 Range Rover Sport SVR, Range Rover Autobiography, two Mercedes Benzes among others with personalised car plates bearing his initials RG.

This picture is terribly wrong, seen on our streets in Zimbabwe at this point in time when there is an acute shortage of forex. #Insensitive pic.twitter.com/k0536rMAUw

Back in New York where Mugabe took along a 70-member delegation including his wife Grace Mugabe to participate in the United Nations General Assembly, his son Bellarmine Chatunga was spotted shopping in the city with a bodyguard carrying his shopping bags.

The two were captured by the Voice of America on Tuesday when President Mugabe was also caught by the cameras at the United Nations headquarters seemingly taking a nap during U.S. President Donald Trump’s address.

I feel you Zimbabwe. #UNGA pic.twitter.com/GvlTAA3fxa

This is one of the several moments Mugabe has been captured on camera in a napping posture which his spokesman George Charamba says he just closes his eyes per advise from his optician to avoid bright lights.

Zimbabweans criticized the lavish lifestyle of the first family and have attacked Mugabe for sending his family to New York on taxpayers’ money when the people cannot even withdraw money from banks due to shortage of dollars.

Below are some reactions.

Mugabe can't even prevail over his own family to avoid embarrassing displays of conspicuous consumption. Lost control of family, & country!

There is a time for everything under the sun, and sadly for outright foolishness too.

How much money was externalised in one transaction ..not bond note I can assure you of that …

insensitive n jus goes 2 show hw those running th country do not care abt the impoverished masses, these pple nd to b shwn th exit door

It is a vulgar show of power and privilege. One wonders the whereabouts about the missing billions???

No drugs in hospitals due to economic downturn but such a lifestyle is criminal. Where did the money come from? Is that our 15bn?

So no one should buy a Rolls Royce because of forex shortages ?

We should just stone the car next time its. Rolling thru our streets

This is exactly what Zuma is doing in SA. Duduzane president's son is a copy of what's happening in Africa

The world should boycott such brands that sell their products to corrupt heads of states and their families. Why would rolls Royce allow thi