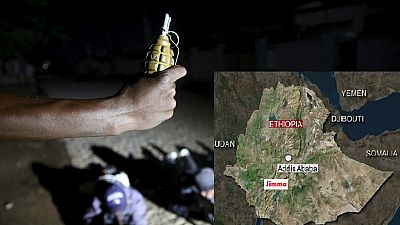 A bomb explosion in the town of Jimma, located in Ethiopia’s Oromo region has injured about 13 people, local media portals have reported.

The town’s police commander, Inspector Fadil Mohammed, also confirmed the incident. Jimma is one of the main towns in southwestern Ethiopia, a fertile region where the government in 2004 had planned to resettle hundreds of thousands of peasant farmers.

The state-affiliated Fana broadcasting corporate reported that the injured persons were receiving treatment at a specialized referral hospital. Among them were a 10-year-old boy and two women.

The attack comes on the second day of a five-day stay-at-home strike called by opposition activists. The attack is said to have occured in a busy part of the town.

The strike, which is largely being observed, is to demand the release of political prisoners detained during the state-of-emergency rule. Ethiopia was forced to impose the rule in the wake of spreading anti-government protests particularly in the Amhara and Oromia regions.

People in the region have previously staged a shutdown to protest tax hikes by the government. Police confirmed that they are on a manhunt for the attacker.

Aside closed businesses, the BBC reports that road blocks have been mounted in parts of the region affecting public transport.