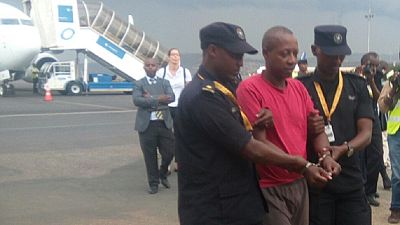 A suspected Rwandan 1994 genocide mastermind Jean Twagiramungu has been extradited from Germany on Friday and handed over to Rwandan authorities for prosecution.

Twagiramungu was in handcuffs and a T-shirt when he was handed over to local authorities at the Kigali International Airport.

He was arrested two years ago in Frankfurt and has since battled extradition in courts which finally proved unsuccessful.

Twagiramungu is the first genocide suspect extradited from Germany.

In November 2016, two suspects – Jean-Claude Iyamuremye and Jean-Baptiste Mugimba – living in the Netherlands were extradited after several judicial proceedings to try them in the Hague.

They lost their case at the Hague Court of Appeal and were extradited per the request of Rwandan authorities.

The two suspects lived in the Netherlands with their wives and children after the genocide in 1994 which saw some 800,000 people, mostly from Rwanda’s Tutsi minority, killed.