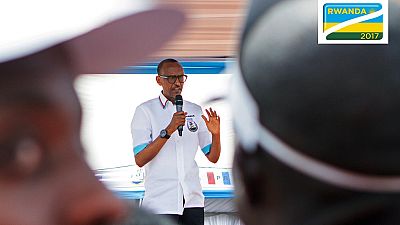 Giving final results at a news conference, electoral commission chairman Kalisa Mbanda said voter turnout had been 98.5 percent. Preliminary results announced late on Friday, the day of the poll, had given Kagame a 98.6 percent vote share.

Frank Habineza and Philippe Mpayimana, Kagame’s two challengers, each got less than one percent of the vote.

“We never expected it to be easy but the struggle continues,” Habineza told Reuters on Wednesday.

Kagame, who has been in power for 17 years, was not meant to stand again but Rwanda’s constitution was changed in 2015 to allow him extend his rule, a move common in the region and which has alarmed Africa’s democracy watchers.

Rights groups and opponents accuse him of ruling with an iron fist, suffocating dissent and dealing ruthlessly with critics.

Some Rwandan dissidents have been killed after fleeing abroad, in cases that remain unsolved. The government denies any involvement.

Kagame’s supporters hail him for achieving robust economic growth and shepherding the country to order and stability after the 1994 genocide in which an estimated 800,000 majority Tutsis and some Hutus died.

On Saturday, U.S. State Department spokesperson, Heather Nauert, hailed Rwanda for conducting a peaceful vote but said there were concerns over vote counting and “the lack of transparency in determining the eligibility of prospective candidates.”

Poll officials disqualified Diane Rwigara, a vocal critic of Kagame, from contesting saying she had used signatures of dead voters to back her nomination. She said the allegation was a pretext to bar her candidature.

A Catholic priest-turned politician, Thomas Nahimana, who lives in France, also planned to participate in the race but he was twice barred by authorities from entering Rwanda.