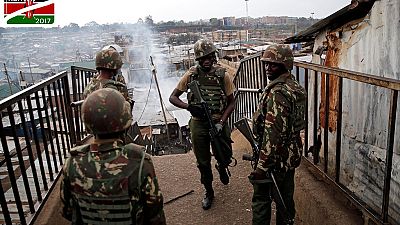 Kenya’s Inspector General of Police Joseph Boinett has assured Kenyans of non-partisan policing in the post-election period which has experienced some tensions.

Joseph Boinett said in a video message on Thursday that they are set and ready to offer best services in the rest of the days of the election period.

“Our key consideration is to ensure that our people have the opportunity in a safe and secured environment to exercise their democratic rights. We are completely non-partisan, we shall be responsive to the needs of our citizens and stick fidelity to the law,” he said.

We are set and ready to offer Policing Services for the remaining segment in the National elections calendar.-JBoinnet. #ElectionsKe2017 pic.twitter.com/mFxLprHMOK

The message was posted on Twitter a day after three people were reported dead after opposition protesters in the port city of Kisumu and Mathare in the capital were dispersed by the police who fired teargas.

The protesters hit the streets throwing stones and burning tyres after opposition candidate Raila Odinga announced that the electronic system for the transmission of results had been hacked in favour of the incumbent who is in the lead.

As at Thursday morning, the capital Nairobi is calm and vote tallying is ongoing after assurances by the electoral commission that the allegation of the opposition will be investigated, while maintaining that its system has not breached.