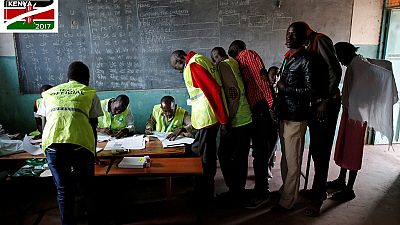 Kenya’s 2017 elections have officially come to an end and vote counting is underway at some centres across the country.

Per the election rules, all those in the queue when the polls closed are to be allowed to vote.

The Independent Electoral and Boundaries Commission (IEBC) has also compensated some polling stations with the exact time they lost at the opening of polls.

They could not open at the exact time alloted due to hitches including late delivery of materials and technical problems.

The electoral commission said three polling stations in Laikipia North were affected by insecurity which was controlled by security agents.

They did not give details of the insecurity.

In Laikipia North three polling stations were affected by insecurity. Security forces have restored calm in the area and polling has resumed

Also, the IEBC said it had fired an official at the Embakasi South who stamped the back of ballots as rejected.

Voters complained that they were offered the ballots without their knowledge of the stamp at the back.

“The ballot papers stamped rejected are not invalid. Rejected ballots are stamped at the front. Not the back. The officer involved has been fired,” the IEBC explained.

Rejected ballots are stamped at the front. Not the back. The officer involved has been fired. #WeweNdioKusema

The IEBC also addressed the allegations of marked presidential ballots saying it is false.

Vote tallying is ongoing at the voting centres and the results are uploaded on the IEBC website in real time.

The results are expected to be declared within seven days.

The candidate with most votes for all the various seats except the presidential will be declared winner.

The winner for the presidential is required to gain over 50% of the votes and at least 25% of the votes cast in each of more than half of the 47 counties to avoid a second round.