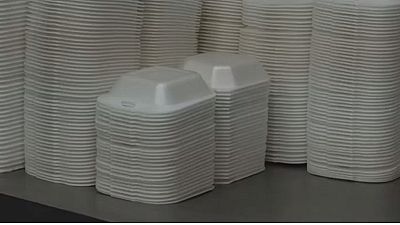 Zimbabwe has imposed a ban on foamed polystyrene, the packaging commonly used for take-out food in restaurants in the country, amid concern that the trays pose potential health risks.

Businesses will now only be allowed to use the containers commonly referred to as Kaylites until October 17th after which they are expected to adopt safer and environmentally friendly packaging.

The ban is part of measures by the Environmental Management Agency (EMA) to help curb health hazards and pollution linked to expanded polystyrene.

We had a report from UZ the University of Zimbabwe indicating that kaylite has a problem in terms of health, because once you put hot food in it, it deteriorates

“We had a report from UZ the University of Zimbabwe indicating that kaylite has a problem in terms of health. Because once you put hot food in it, it deteriorates forming a gas called styrene which is poisonous to the body, it causes kidney malfunction and cancer, that’s the reason why we put the ban,” said Zenzo Nsimbi, the board chairman, of the Environment Management Agency.

They are not biodegradable and are difficult to recycle making them an environmental pollutant.

Conservationists are pushing manufacturers to focus on containers made from natural materials like sugar cane pulp or bamboo, but these weigh more and cost more compared to traditional foam trays.

The ban follows a trend that has seen various countries impose restrictions in the west on use of the foam containers in serving food over the years.

Theo Dos Santos, who runs a restaurant in Harare, says though he does not oppose the ban, it has presented new challenges for business owners like him.

“The problem is that it was done with a short notice and some of us who were caught unaware think we should have been given time for us to prepare ourselves to adjust to the new packaging because even the suppliers are not yet ready to supply us with the new packaging,” he said.

The new directive has received mixed reactions from ordinary Zimbabweans.

“These kaylites were now littering the streets. But most importantly I think because of health concerns as the authorities say — they cause cancer, the ban is good for us citizens,” said Jordan Erikazi, a Harare resident.

The ban comes after a law that was meant to take effect in 2016. Those found violating the ban could attract a fine of up to 5,000 dollars.

Nondegradable polymers like polystyrene require more than 200 years to begin even partial degradation and cannot be easily incinerated since they emit toxic gases highly.