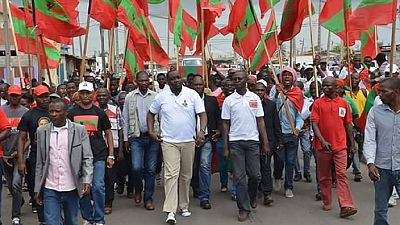 A month to the presidential elections in Angola infighting has intensified within the main opposition party UNITA.

“Angolans wanted peace and then oil enabled Angola to earn large sums of money.. Angola could have diversified is economy. Unfortunately, our government does not have the best vision.
After oil, Angola will have to take another track… That is why, as a young Angolan I said no I said no, it is necessary that I commit myself politically so that I can also give my modest contribution to change this country,“Angolan opposition party leader, Rafael Savimbi said.

After a long war for positions, the party has finally found stability to engage in the fight.

“During these fifteen years, it was necessary to give hope to the people. It was necessary to re-mobilize the troops as we said, it is something that has not been easy. But it should be given time so that the people would better understand the reasons for the fighting within UNITA, “ Mr. Savimbi added

The ruling party hopes to win big during the August election. But, nothing indicates that the retirement of President Dos Santos, after 38 years in power will change the established order.