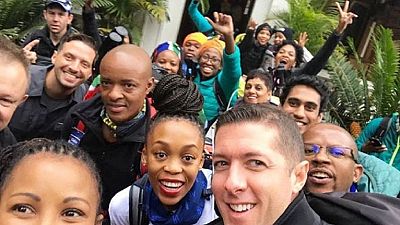 A group of girls’ rights campaigners have embarked on the 2017 Trek4Mandela expedition of climbing Africa’s highest mountain – Mount Kilimanjaro – to create awareness about the challenges facing impoverished girls in rural and poor schools during their monthly cycles.

This expedition, started since 2012, is an initiative for Nelson Mandela International Day to raise funds for the Imbumba Foundation’s Caring4Girls programme that distributes sanitary towels to make sure needy girls go to school during their menstrual period.

27 climbers – each representing a year that Mandela spent in prison – from around the world journeyed from South Africa to the base of the mountain in Tanzania and started climbing on July 13.

2017 Trek4Mandela climbers have completed their 1st day & are all safe this evening at Mandara Hut #Kilimanjaro #Caring4Girls #GirlChild pic.twitter.com/WMsr8Y2rbZ

They reached the 5,895-meter summit on Nelson Mandela International Day July 18, which is also the anti-apartheid hero’s birthday.

The #Trek4Mandela climbers have successfully summited #Kilimanjaro & are currently on their way down the mountain #Caring4Girls #GirlChild pic.twitter.com/sCFi1KSD4c

They returned on Thursday, July 20 to a rousing welcome by families and friends.

Congratulations & welcome back to the 2017 #Trek4Mandela climbers from their efforts to keep the #GirlChild in school #Caring4Girls pic.twitter.com/KzEbPNyRnh

The climb has gained popularity with its iconic send-off and welcome events in Johannesburg.

Each climber aims to raise at least R1.5 million ($115,127) for Caring4Girls to support as many underprivileged girls as possible with sanitary pads.

The expedition attracts celebrities and government officials who help in the fundraising.

His wife, Letshego Zulu embarked on this year’s climb in honour of her late husband.