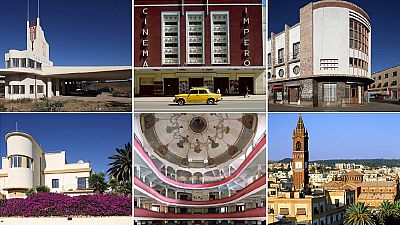 Asmara, the capital of Eritrea has officially been labeled a World Heritage site by the United Nations Education, Social and Cultural Organization (UNESCO).

It followed years of lobbying by the country which is nestled between the Red Sea and Ethiopia, Sudan and Djibouti.

Eritreans have long maintained that their capital, also known as “Little Rome” is like no other city in Africa. The U.N. cultural body finally accepted the claim during a meeting of the World Heritage Committee in the Polish city of Krakow over the past weekend.

It is an exceptional example of early modernist urbanism at the beginning of the 20th century and its application in an African context.

The country’s ambassador to France and permanent representative to UNESCO, Hanna Simon, hailed the World Heritage victory stating that it was a victory the world had to celebrate.

According to her, it took “years of research, planning and campaigning,” to achieve the feat and that the “victory (was) not just for the Eritrean people but for Africa and the world at large.”

Eritrean authorities have long put forth the city’s unique architecture as basis for its push to have it marked a World Heritage site. The architecture includes an art-deco bowling alley with coloured glass windows and a petrol station built to resemble a soaring aeroplane.

As a former Italian colony, most of the city’s architecture dates back to the rule of fascist dictator Benito Mussolini from 1936 to 1941.

What UNESCO said about Asmara

UNESCO described Asmara as “a Modernist City of Africa,” according to a statement on its website.

“Located at over 2000 metres above sea level, the capital of Eritrea developed from the 1890’s onwards as a military outpost for the Italian colonial power.

““The property encompasses the area of the city that resulted from various phases of planning between 1893 and 1941, as well as the indigenous unplanned neighbourhoods of Arbate Asmera and Abbashawel.

“It is an exceptional example of early modernist urbanism at the beginning of the 20th century and its application in an African context,” the statement concluded.

An architect, Naigzy Gebremedhin, commenting on the UNESCO decision said, “There was great freedom in experimenting at Asmara, and the instructions given to the young Italian architects were to publicize fascism, but once away from Rome they gave free rein to their imagination.”

Kate Kamphorst, an Australian volunteer also expressed joy at how Asmara looked, “Many buildings are still inhabited, it looks like time has stopped, but it’s very beautiful.

“Architects whose designs were unwelcome in conservative European cities found a place in Asmara at a time when about half of the city’s population was Italian and the city was known as ‘Piccola Roma’, or “Little Rome”.

While the modernist architecture of other Eritrean cities were destroyed during a decades-long war of liberation from Ethiopia, Asmara’s survived and was declared a national monument by the government in 2001, which refers to it as Africa’s “City of Dream”.

But efforts to restore the marble facades and Roman-style pillars of the city’s theatres and cinemas have been hampered by a shortage of money and local expertise, city authorities say.