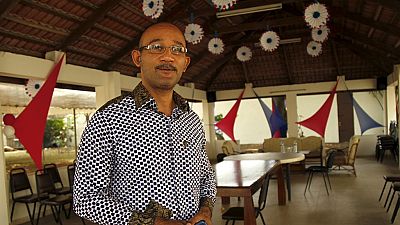 Michel Gbagbo, the son of former Ivorian President Laurent Gbagbo, has been hurled before a court in Abidjan for broadcasting “fake news,” his lawyer confirmed to the AFP news agency on Thursday, June 22.

The 47-year-old is expected to appear before the court for announcing the disappearance of political prisoners in the country last year. He faces the charges along with general manager of influential news portal koaci.com, Laurent Despas.

“The trial of Michel Gbagbo will open tomorrow (Friday) before the Plateau Correctional Court for the disclosure of false news,” his lawyer Ange Rodrigue Dadje told AFP.

The trial of Michel Gbagbo will open tomorrow (Friday) before the Plateau Correctional Court for the disclosure of false news.

The two men were indicted on 26 May 2016 about three weeks after the website carried an interview by Michel making the claims of disappearances and illegal detentions by the government.

In the said interview, Michel Gbagbo declared that “as at March 30, 2016, 250 people were still detained in Ivorian prisons and that another 300 people charged and placed under a warrant since 2011 were missing”.

The Ivorian prosecutor’s office subsequently dispelled Michel’s claims stating that no cases of disappearance of the accused of the post-election crisis have been seized. Prosecutor Richard Adou described Michel Gbagbo’s “baseless and false” statements.

Michel Gbagbo, the son of former President Gbagbo, was sentenced on 10 March 2015 to five years’ imprisonment for “assassination of the State.”

Simone Gbagbo, the wife of former President Laurent Gbagbo, is serving a sentence of 20 years in the same case after being found guilty for her role in the crisis caused by her husband’s refusal to recognize Alassane Ouattara’s victory in November 2010 presidential election.

Laurent Gbagbo has been jailed since the end of 2011 in The Hague, where he was tried by the International Criminal Court for alleged “crimes against humanity” committed during the 2010-2011 post-election crisis, which left more than 3,000 dead in Ivory Coast.

The Ivorian reggae star Alpha Blondy in mid-May called for a “general amnesty” and the release of all detained prisoners, including Simone Gbagbo, as part of the 2010-2011 post-election crisis in Ivory Coast, believing that the country is experiencing a “trauma”.