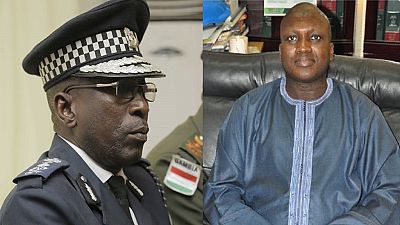 Gambian President Adama Barrow has replaced the longest-serving Inspector General of Police (IGP) Yankuba Sonko, who has served in that position under exiled former President Yahya Jammeh since 2010.

Sonko was replaced by Landing Kinteh on Thursday and redeployed to the foreign and diplomatic mission, local media report.

Soko’s deputy Ousman Sowe was demoted to the rank of commissioner and replaced by commissioner Mamud Jobe who is now the Deputy Inspector General of Police.

“I thank you all, from the last recruit to the most senior officer … Be loyal to the Government of the day and always remember that as service men you should always be neutral for you are not politicians,” said Yankuba Sonko who was quoted by news portal The Fatu Network.

Meanwhile, another appointment was made at the Immigration Service. It’s Deposed Director General Buba Sangnia was reinstated.

He was removed, arrested and detained on charges of abuse of office under the former President Jammeh. He pleaded not guilty but was convicted and fined.

Buba Sangnia returns as the Director General of Immigration.

Who is the new IGP Landing Kinteh?

Landing Kinteh has served with the African Union and United Nations missions in Darfur for several years until his appointment.

He rose through the rank in the Gambia Police Force from the Airport Police Unit to the Prosecutions and Legal Affairs Unit.

Kinteh helped establish the National Anti Trafficking In Person (NAATIP) which he was its first Executive Director.