Gambia: Pro-Jammeh newspaper shut down for evading over $300k in taxes 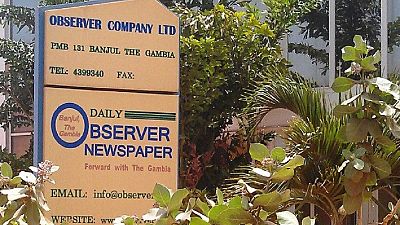 The Gambian government has shut down a former pro-government newspaper, the Daily Observer, for not paying taxes since 2007 during regime of exiled former President Yahya Jammeh.

The Gambia Revenue Authority (GRA) issued the national newspaper a closure notice on Wednesday ordering them to cease publication, the head of the company Pa Modou Mbowe confirmed to local media.

“I can confirm to you that the Daily Observer has been closed by the Barrow government. I received a letter today from the Gambia Revenue Authority instructing us to cease publication,” he said.

I was employed by Yahya Jammeh, the former president to head the Daily Observer. I had to leave England to stay here and create employment opportunities to our people. It is very sad that the paper is closed.

“The paper is owing the state D17 million taxes dating back to 2007. The paper is also indebted to other companies,” he added, saying the letter indicates that the closure is for two weeks pending further actions.

The newspaper, launched in 1992, is reportedly owned by Jammeh after he bought it from the original owner – Kenneth Best – whom he deported to his home country Liberia.

The paper stood tall while journalists suffered abuses and censorship under Jammeh’s regime leaving many without option but to operate outside the country to avoid persecution.

It employed over a hundred workers who were regularly sacked if they went against the government in their line of duty.

“We have 105 people working for this paper. The latest decision to shut down the paper will render all these folks unemployed. I was employed by Yahya Jammeh, the former president to head the Daily Observer. I had to leave England to stay here and create employment opportunities to our people. It is very sad that the paper is closed,” the Managing Director Pa Modou Mbowe told the Freedom Newspaper in Banjul.

Gambian journalists have expressed worry over the closure of the newspaper which some describe as an attack on press freedom.

A former editor of the newspaper, Alhagie Jobe, said on Thursday that the paper had never paid taxes during the 12 years he worked with the company till he fell out with Jammeh’s regime in 2013 and left.

“GRA had on numerous occasions notified the previous managements about the tax arrears but because of the then President Jammeh’s link to the company, the GRA dare not order for closure or take any drastic action as they did today,” he posted on Facebook.

He however called on the state to rescind its decision of closing down the paper but find ways of recovering the money.

“Observer Company should pay tax. Meanwhile, I call on the authorities to rescind their decision and allow the company to continue operating as it employs 105 dedicated Gambians. Let there be room for negotiations,” he added.

Another former editor of The Independent newspaper banned by Jammeh, Alagi Yorro Jallow, appealed to the government to reconsider the decision which will affect the families of the workers.

President Adama Barrow has promised to give Gambian journalists a free environment to work without any censorship nor persecution.