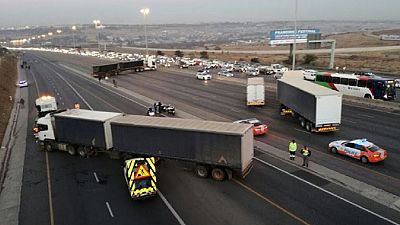 Taxi drivers in South Africa’s Gauteng province have blocked major roads in the country’s biggest city Johannesburg in the early hours of Thursday as part of a strike action.

The blockade was sanctioned by the authorities as the taxi drivers are protesting against the monthly cost of their Toyota vehicles and high interest rates.

“They are making their way to Midrand. This protest is expected to be completed at 15:00. This is a legal gathering,” the Johannesburg Metro Police Department (JMPD) spokesperson Wayne Minnaar told local media.

The drivers are marching to the South African Taxi Finance offices in the town of Midrand.

The blockade has shut down the city and affected commuters in the administrative capital Pretoria. It has also left school children who are writing their end-of-term examination stranded.

The Gauteng education authorities urged parents to keep their children at home, and school authorities to reschedule the examination for those who do not make it to school.

“The department has communicated to all school principals to give children that could not make it to school today another opportunity to write at a later stage,” Gauteng education official Panyaza Lesufi announced.

The Taxi Protest in Gauteng has been very carefully planned and executed. It will be very difficult for anyone to get around. #TaxiStrike