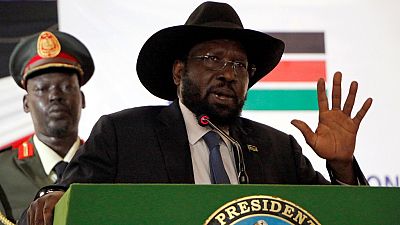 South Sudanese President Salva Kiir has declined the invitation to the Extra-Ordinary summit of the Intergovernmental Authority on Development (IGAD) trade bloc to be hosted by Ethiopia.

The regional summit, to be held in Addis Ababa on June 12, 2017, will focus on the worsening security situation in South Sudan which has rendered thousands homeless.

“He [Kiir] will not attend the IGAD summit. The president has already sent a letter of apology through the minister in his office,” Kiir’s spokesperson, Ateny Wek Ateny was quoted by local media Sudan Tribune.

“There are no reasons, but the president is attending to other things here in South Sudan. The team that will represent the president has not yet been formed,” he added without citing reasons.

He [Kiir] will not attend the IGAD summit. The president has already sent a letter of apology through the minister in his office.

The eight-country trade bloc comprise countries from the Horn of Africa (Ethiopia, Djibouti, Somalia and Eritrea), the Nile Valley (Sudan and South Sudan) and the African Great Lakes region (Kenya and Uganda).

The 31st Summit is expected to stress on the inclusive national dialogue to end the security and humanitarian situation in the country as a result of conflicts between government forces and armed opposition groups.

The bloc believes in the implementation of the 2015 peace agreement signed between the government and opposition for a transitional government of national unity.

The agreement faltered after renewed conflicts in 2016 between the two parties that saw the former First Vice President Riek Machar flee the country to South Africa where he is based.

Kiir has launched a framework to organise a national peace dialogue which is expected to invite the armed opposition.

He has however stated that whoever answers to the call will be included in the dialogue.

South Sudan has been ravaged by civil war since 2013, when President Salva Kiir fired his deputy Riek Machar, who is currently leading the armed opposition.