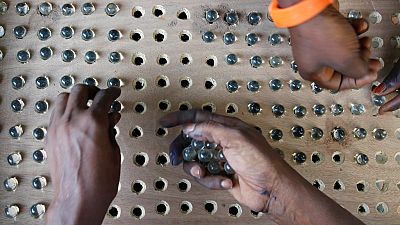 886, 578 registered Gambian voters are expected at the polls on Thursday, April 5, 2017 to elect 48 people out of 238 candidates into the National Assembly using the country’s distinct glass marble and ballot drums.

5,462 polling agents have been dispatched to the 53 constituencies nationwide to manage the process while 122 returning officers will ensure that counting of ballots runs smoothly, the Independent Electoral Commission (IEC) Chairman Alieu Momarr Njai said on Monday.

“The results of each of the 53 Constituencies must be collated at each of the 7 Administrative Areas before being announced by the Returning Officer and transmitted to me for announcement over GRTS,” he explained.

This the fourth parliamentary election to be conducted by the IEC and the chairman has confirmed that nine political parties have registered with the commission including former President Yahya Jammeh’s Alliance for Patriotic Re-Orientation and Construction (APRC).

Our electoral system is second to none in terms of its transparency, credibility, fairness and accuracy. No one can rig it.

“Our electoral system is second to none in terms of its transparency, credibility, fairness and accuracy. No one can rig it,” Njai assured election observers from the ECOWAS, African Union and the European Union.

The coalition of seven political parties led by new President Adama Barrow to win the election agreed to split and stand for the parliamentary election under their individual parties.

The election will start at 8 am and end at 5pm local time before the marble ballots will be counted and declared at the polling station.

In 2016 ahead of the December 1 presidential election, the IEC introduced an “on the spot vote count system” to increase transparency and for a candidate with a simple majority of votes to be declared winner.

The National Assembly has 53 members but only 48 will be elected and the five other members appointed by the president per the constitution.

The Head of the ECOWAS Election Observation Mission to The Gambia, Prof. Kwadwo Afari-Gyan has appealed to all political stakeholders to ensure that the elections are held in peace to consolidate the gains of democracy in the country.