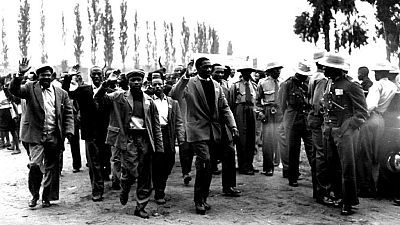 On Monday, March 21, 1960, after a decision to embark on a peaceful protest to denounce pass laws designed to segregate South Africans, 300 armed policemen opened fire at over 5000 protesters at the Sharpeville police station killing 69 on the spot.

The protest was organised by the African National Congress (ANC) breakaway group, Pan Africanist Congress (PAC) who called on South Africans to leave their passes at home and march peacefully to police stations nationwide to be arrested.

The protest was peaceful at other police stations where no arrests were made; but the Sharpeville Massacre that resulted in 180 injuries changed the face of the apartheid era as subsequent protests erupted and more deaths recorded.

As we remember the Sharpeville and Langa Massacres, we must appreciate and respect the experiences and pain of black people. pic.twitter.com/wGk6v29EGE

The pass laws were repealed after 26 years in 1986 following series of protests and subsequent ban of both the ANC and PAC parties.

The United Nations in 1966 proclaimed the day as the International Day for the Elimination of Racial Discrimination and South Africa marks the day as Human Rights Day.

On Tuesday March 21, 2017, a free South Africa led by President Jacob Zuma is commemorating the day by honouring anti-apartheid activist and Black Consciousness Movement leader Steve Biko who was murdered 40 years ago at the age of 30.

Wreaths were laid at the Phelindaba Cemetery in Sharpeville, Gauteng where the victims of the massacre were buried, and at the monument next to the police station where they were shot.

It is climaxed with a 2km anti-racism and anti-xenophobia walk from the monument to George Thabe Stadium.

The United Nations is also marking the day under the theme: Racial profiling and incitement to hatred, including in the context of migration.

Tuesday is Intl Day to #FightRacism. Stand up against discrimination, every time & everywhere it happens. Every day. https://t.co/ptRJfGs5XS pic.twitter.com/llhaeEe15e