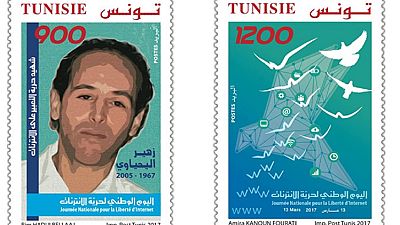 The Tunisian Post announced on Monday the issuance of a stamp bearing the effigy of popular cyber-dissident, Zouhair Yahyaoui, who actively opposed the regime of former president Zine el Abidine Ben Ali.

Zouhair Yahyaoui was tortured in prison and died after his release 12 years ago at the age of 37.

In honor of the young man, the date March 13 has been marked since 2012 as the “National Day of Internet Freedom”.

For its 6th edition, La Poste decided to issue two stamps paying tribute to all those who campaigned for the right to information and freedom of expression on the internet.

The first “has the effigy of the late Zouhair Yahyaoui, pioneer of cyber-dissidence”, while the second “symbolically illustrates internet freedom after the revolution,” the public institution said in a statement.

Former president Ben Ali had established a police dictatorship where the Internet was closely monitored and many sites censored since he came to power by a coup in 1987 until his ouster by a popular uprising in January 2011.

Zouhair Yahyaoui, also known as founded the “TUNeZINE” satirical website in 2001, where he publishes, together with other activists, articles that were very critical of the regime.

Inaccessible from Tunisia except by proxy, the site was widely read by opponents of Ben Ali’s regime abroad.

Zouhair Yahyaoui was arrested in 2002 for “publishing false news”.

He was sentenced to two years and four months in prison and was tortured. He was released on parole in November 2003 but weakened by ill-treatment and hunger strikes.

He died in 2005 of a heart attack, at 37 years of age. A place bearing his name was inaugurated in his district of Ben Arous, in the southern suburbs of Tunis.