'Upbeat and jovial' Mugabe returns from Singapore after medical review

Zimbabwean President, Robert Mugabe, has returned to the country after a ‘scheduled medical visit’ to Singapore.

The state-owned Zimbabwe Broadcasting Corporation (ZBC) reported of Mugabe’s return in the early hours of Sunday.

According to ZBC, Mugabe who looked ‘upbeat and jovial,’ took time to chat with his two vice-presidents who had come to receive him at the Harare International airport. There were at least four ministers, other senior government officials and security chiefs at the airport to receive him.

Latest: President Mugabe is back in the country from Singapore pic.twitter.com/xMusAbkLkI

Mugabe left the country on Wednesday (March 1) days after celebrating his 93rd birthday in the city of Bulawayo. His spokesperson confirmed on Wednesday that the trip was a ‘scheduled medical checkup. He was accompanied by his daughter, Mrs Bona Chikore on the trip.

“His Excellency the President left for Singapore for a scheduled medical review. We expect him back in the country early next week,” spokesman George Charamba said but did not give details.

The president usually travels to the southeastern Asian country to seek medical attention from what his aides have repeatedly said is eye cataract. Local media portals have peddled news of the 93-year-old suffering from cancer.

Two journalists were on Friday charged with undermining the president for the publication of a story suggesting that Mugabe was hurriedly flown out of the country in ‘bad shape.’ 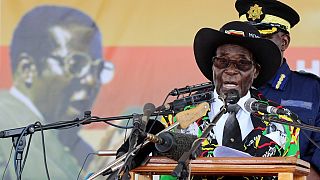 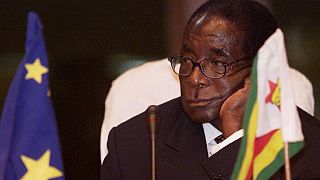